MENUMENU
Bubur Lambuk, a lightly spiced rice porridge, is a Ramadan tradition in Singapore and Malaysia that can be traced back to a mosque, in the mid 20th century in Kuala Lumpur, Malaysia.
Jump to Recipe Print Recipe

Bubur Lambuk, a lightly spiced rice porridge, is a Ramadan tradition in Singapore and Malaysia that can be traced back to a mosque, in the mid 20th century in Kuala Lumpur, Malaysia.

This is a recipe that I’ve been wanting to blog for quite a few years now, and thanks to a nudge from a friend on Instagram, I’m finally getting around to doing it.

Bubur means porridge, and this can be sweet or savoury, as we have a gazillion kinds of porridge in South East Asia, made with all kinds of grains.

Now, there are a couple of stories explaining the origin of bubur lambuk. One claims that it dates back to 15th century Malacca, and something  to do with visiting royalty from the north.

However, the more commonly accepted claim is that this iconic Ramadan recipe was created in 1949 by the late Said Benk. He was a Pakistani immigrant, and a congregant of the old Jamek mosque (Masjid Jamek) in an area called Kampung Baru, in Kuala Lumpur, the capital of Malaysia.

One day, during Ramadan, the fasting month, he brought with him a homemade rice porridge for Iftar (breaking of the fast), sharing it with his fellow congregants.

It proved to be such a hit, that he was asked to make it for everyone for the rest of the month. I am inclined to believe this story because bubur lambuk has a definite south Asian (Indian, Pakistani, etc) flavour to it.

Now apparently, that recipe was handed down person to person to this day, a recipe that only the mosque’s chief cook knows, and guards religiously. This recipe and tradition is so popular that it’s made its way to all parts of Malaysia and Singapore (which until 1965, was part of Malaysia), and also Indonesia.

Every day, during the fasting month, bubur lambuk is given out free to anyone who wants to take home a tub of it, whatever your circumstances. Giving out food or sharing your food with your neighbours and friends is very common practice that is highly encouraged during Ramadan.

When we were young, someone would always come back with a tub of it, no matter how much food my granny had prepared. It’s just something that was done, a tradition that one enjoys following.

It’s a very easy recipe to make at home. The ingredients may look a little misleading, it looks like a long list, but this is one pot cooking at its best. It’s rustic, it’s basic, but it’s so, so satisfying!

We place everything in the saucepan and leave it to cook away for 30 minutes or so. Nothing could be simpler. Most of the ingredients are easy to come by, the dried shrimp (image below) is the only one that you may have a problem finding depending on where you are. But more of that below.

Bubur Lambuk is flavoured with a combination of:

How much you use of the ingredients will affect the final flavour. My mum used to pile on the ginger. LIKE CRAZY. Being a huge fan of ginger (teh halia, anyone?), I absolutely loved her version.

I add a little turmeric to my bubur lambuk, for both a touch of colour as well as aroma.

Click here to read more. Dried shrimps are shrimps that have been sundried and have shrunk in size. Coveted in many cuisines around the world for its umami taste, dried shrimp have a very strong scent and flavour of the sea.

If you can’t find them, or don’t want them, just leave them out. For a vegetarian umami hit, add sliced shiitake (mushrooms) to your bubur lambuk.

Click here to read more The pandan plant or pandanus amaryllifolius is a tropical plant that is highly valued in Asian cooking. It has a grassy, sweet aroma and is used in both sweet and savoury dishes as both a herb for its fragrance, as well as its colour.

You can leave this out completely, as we’ll be topping the porridge with fresh coriander leaves (cilantro) and spring onions (scallions).

It’s so easy to convert the traditional recipe into a vegetarian or vegan one. Just skip the dried shrimp and use soya mince, something I do at home, because most of my kids are vegetarian.

In fact, you could even just use tiny cubed carrots and peas; and shiitake, as mentioned above.

For all my fellow similarly displaced Singaporeans and Malaysians. Let’s get our aprons on!

Head on over to the Ramadan page for an amazing collection of cosmopolitan recipes that will see you through the whole month. Like the following:

♥ If you like the recipe and article, don’t forget to leave me a comment and that all important, 5-star rating! 😉 Terima kasih! ♥ 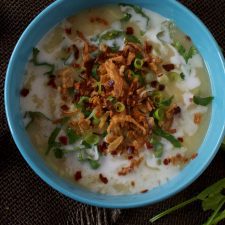 Boil the water with spices and aromatics

When the water is boiling

Nutrition is based on using lean minced beef, 3% fat.