Fried Gefilte Fish seem to be a singularly British Jewish food, made with minced fish, onions and spices and fried for a lovely crisp on the outside, soft on the inside bite.
Jump to Recipe Print Recipe

Fried Gefilte Fish, a singularly British Jewish food, is made with minced fish, onions and spices, and fried, for a lovely, crisp on the outside, soft on the inside bite.

About a year ago, I posted a recipe for the traditional Gefilte fish, and as I explained then, the word Gefilte means “stuffed fish” in Yiddish, and this is how you say it:

My Jewish culinary education took place in the year that I worked in Golders Green in North London, a very Jewish area. I fell in love with both types of gefilte fish, and with Jewish food, generally.

Imagine my surprise on my first trip to Israel, when all I could find were the traditional, poached kinds as in this post. It was only when I got back to London after that trip, that I discovered that the fried versions are, apparently, a very British Jewish tradition.

Our fried fishball recipe is exactly as the poached one, the only difference is of course, in the cooking!

It’s always a good idea to use different types of fish, a minimum of two but 3 or 4 is ideal – this gives different dimensions of flavours to your final product. For more pictures of the minced fish and the final gefilte fish paste, have a look at the traditional gefilte fish recipe.

How to serve Fried Gefilte Fish

It’s a pretty straightforward recipe: make the paste, form balls, then fry! Shall we get our aprons on? 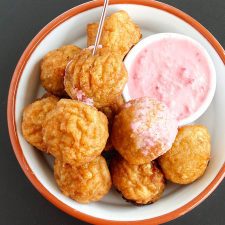