MENUMENU
Gin and Tonic, the classic British drink, with the addition of the sour and slightly bitter Australian Finger Lime and aniseed-y basil.
Jump to Recipe Print Recipe 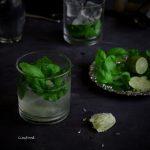 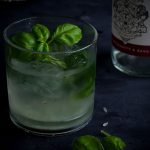 With gin seeing a revival these last few years around the world, all forms of flavours have sprung up on the market. And if you’ve been following me a while, you know that I enjoy making gin infusions, like the following:

Gin and Tonic History, Anyone?

Well, it started with the gin. Add some Dutch courage, then pass it over to the British army in India.

There is a whole lot of speculation, conjecture and arguments over the origin of gin and when it was first created.

While the invention of distillation was credited to the Arabs in the Middle Ages, the world’s first known gin recipe is thought to have come about in the 15th century, with spices like galangal, star anise, grains of paradise, ginger, etc.

But if you ask me, that sounds suspiciously like D.O.M. Bénédictine.

But hey, what do I know?

Did the Dutch invent Gin?

Dr. Sylvius de Bouve is credited with having invented the drink as we know it today, juniper flavoured grain alcohol, or Genever, as it was called, the Dutch name for juniper. It was prescribed as a digestive aid; not unlike the gin based British Pimm’s, then?

Suffice it to say, British soldiers discovered it in Holland during the 30 Years’ War and took it home with them. Because the Dutch soldiers always had a supply of it wherever they went, gin also became known as Dutch courage, a term still used to this day to mean confidence or strength boosted by alcohol.

Gin proved to be a massive hit with the Brits, with homemade distillations running rampant and the name somehow got shortened from genever to gin. Simon Ford, of Ford’s Gin says,

What I take from this is that the British were too drunk to pronounce genever so they abbreviated the word to ‘gen,’ which eventually gets anglicized to the word that we use today.

What about the Tonic Water in Gin and Tonic?

Fast forward a few hundred years, mid 19th century onwards, and we’re in India during the times of the British Raj, when India came under the British Empire. Taking advantage of the new colony and its warmer weather, many Brits, men and women, flocked to India.

And were introduced to malaria.

By then, quinine was a well known antidote to malaria. The powers that be of the British army mixed it with water and created the first tonic water in an attempt to ward off this tropical evil.

It didn’t take long for the Brits to realise that adding their much loved gin to the tonic water significantly improved its flavour.

And Gin & Tonic was born.

Adding lime to the mix not only made the drink much more enjoyable, but it also improved the scurvy that many would have suffered from the long voyage over. You know, lack of vitamin C?

Gin and tonic has saved more Englishmen’s lives, and minds, than all the doctors in the Empire.

So that’s the Gin and Tonic taken care of, let’s take a look at the lime that we’re using in this recipe. Because it’s special.

These tiny, astringent sacs look like caviar, hence their more sophisticated name, lime caviar, or caviar lime. As soon as I started growing the plant, I knew I had to try it in a gin and tonic.

Australian finger limes are citrusy, tart, with a touch of bitter, and just a hint of sweet. Personally, I think it’s almost like a cross between a Persian lime and a young grapefruit, with some lemon basil thrown in. Hence the basil leaves in the drink today.

What Tonic Water to Use in Gin and Tonic?

Whatever gin and tonic you’re having, the tonic water is a matter of choice. I just love the variety that’s available to us these days by all sorts of brands. These are some of my favourite flavours:

How much Tonic Water to Use?

This is completely a matter of taste. Some like to drown their gin in tonic, while some like to have just a drop or two. I’m definitely in the second camp, especially when it’s a gin I like.

So how much tonic water you use is completely up to you.

Shall we go have ourselves a glass of gin and tonic? 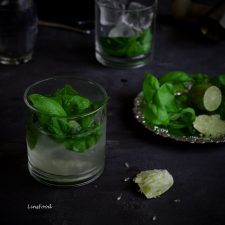 Gin and Tonic with Australian Finger Lime and Basil

Nutrition is based on 50ml (2 fl oz) tonic water added to the same amount of gin.