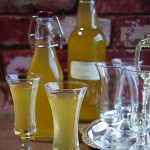 When you drink it, you’ll understand why, it is warming and it is soothing; no wonder then that it is the Polish and Lithuanian equivalent of the hot toddy, for curing colds!

I was introduced to Krupnik by a dear friend from Poland, called Anya. This was a drink that was always homemade by her mum and served during Wigilia, the traditional Christmas Eve meal. The drink would be handed around in a little glasses before and after the meal, with even the kids getting a sip, if they were lucky!

There are many, many recipes for Krupnik, or Krupnikas, as it’s known in Lithuania, depending on the region and the family. Much of the difference lies in the type of honey used, as well as the spices themselves.

The vodka or pure alcohol and honey is non negotiable, forming the basis of this delicious liqueur. You can, however, be as fanciful as you, err, fancy, when it comes to the number and types of spices used. I am fairly conservative in the spices but I do like to add a generous amount of citrus.

Some people simmer the ingredients and let it all steep away for just a few hours, while others go down the overnight route. Anya only ever did it for a couple of hours because she said she could never wait!

But I’m going down the traditional route of letting it all develop overnight, for a deeper flavour and aroma. In fact, I’ve been known to drop a cinnamon stick and a couple of juniper berries after the liqueur has been strained into bottles. Why not?

So here’s the recipe for Krupnik, or Krupnikas, as I make it these days. Despite it being a little bit different from how I watched Anya making it, I’ve named it Anya’s Krupnik, because that’s how it’s known in our home, even after all these years!

Have you ever tried it? It is so easy to make, and an essential ingredient in the Christmas Margarita I’ll be posting this Friday! So go ahead and make it, you know you want to!

More infusions and cocktails on the Drinks page:

You will also need:

Total time does not include overnight steeping.