Skip to content
Mafé, is a Senegalese Peanut stew that is found all over West Africa and Sub Saharan Africa. It is a stew with meat, root vegetables and ground peanuts
Jump to Recipe Print Recipe

Mafé, is a Senegalese Peanut stew that is found all over West Africa and Sub Saharan Africa and is one of the many variations of the Groundnut/Peanut Stew of West Africa.

Believed to be the traditional food of the Wolof and Bambara people of Senegal and Mali, it is a stew with meat, root vegetables and ground peanuts or peanut paste (peanut butter).

I was introduced to Mafé by a friend on the old Google+ sometime in 2013. I spent a lot of time talking to people about it and looking the recipe up. There were many different thoughts and ideas about what makes a good Mafé.

When I first posted this recipe in 2013, there were hardly any around online. So there wasn’t much to be gleaned from that source. Because you know, it’s always the history and background of a recipe that I’m interested in more than the recipe itself.

There was talk about fish sauce, I remember. And given the popularity of Thai food, everyone (including the Africans) just assumed it was the South East Asian fish sauce.

But I wasn’t happy with that, to me, it just didn’t make sense, even if Maggie seasoning is a very common East & West African ingredient.

After months of chatting to virtual strangers (Google+ was amazing!), I was finally confident enough to put together a recipe.

One of the guys, Adama, went an extra mile. He consulted his grandma, and she solved the problem of the fish sauce. Apparently, it refers to hot sauce, like Frank’s hot sauce or just regular tabasco. Basically something hot with a marked vinegary flavour.

So this recipe is a product of all those discussions I had with those folks.

The traditional Mafé would use a lot more ground peanuts or peanut butter than I have here. Despite being a peanut butter lover, I balked at the thought of all that peanut butter in my stew, so reduced it to just 4 tablespoons.

The taste is simply amazing, nutty, creamy and spicy. There is quite a lot of chilli in here; it’s meant to be fairly spicy, given the scotch bonnet. I use a combination of a fresh habañero (scotch bonnet), hot sauce and chilli flakes for an all rounded flavour.

How to Serve Mafé

In West Africa, Mafé is quite often served with fonio, a grain commonly cultivated and consumed there. We can’t get fonio here, so I tend to have it with couscous or rice.

The amount of chilli given here will produce a pretty hot stew. If you’re not keen on the heat, exchange the Scotch Bonnet for an ordinary red chilli, like a jalapeño. I am using beef in this recipe, however, any meat will do.

Vegetarians, substitute the meat with all manner of root vegetables, beans and stew friendly vegetables, like:

Don’t forget to chop the vegetables to roughly about the same size, I like to go for an about an inch. This will make for  more uniform dish and easier eating.

Don’t be put off by the long-ish list of ingredients, it’s all about assembling it together, then it’s child’s play. 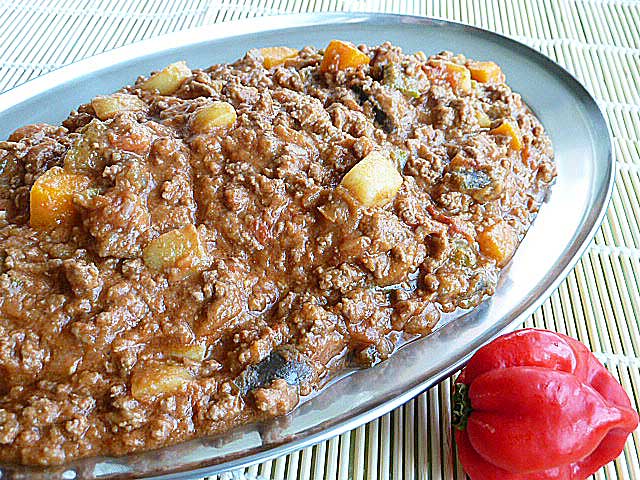