Skip to content
Potted Duck recipe. Or Rillettes de Canard as the French call it. A classy little starter that can be made days ahead.
Jump to Recipe Print Recipe 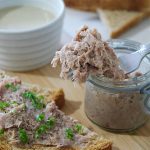 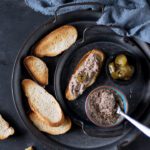 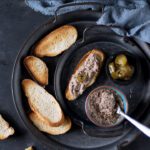 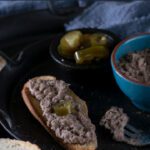 Rillettes de Canard, is like pâté. Duck legs are slow cooked, then the meat is chopped or shredded, seasoned heavily, and potted up into little containers. Perfect as a starter during any festive season.

Having grown up in Singapore, the whole seasonal cooking thing still gets me very excited! Even after a quarter of a century in the UK!

Or potted meat, for that matter.

Speaking of shredding the meat, many people like their rillettes or potted meat to be as smooth as pâté. To that end, they often place it in a food chopper.

The danger here is over processing it and getting a rubbery mix. If you do want to use a chopper for shredding your cooked duck, be sure to use the pulse action.

You will see from the potted duck recipe here, that I’ve gone for minimal flavours, letting the duck speak (quack?) for itself.

I’ve refrained from the popular French quatre épices (4 spices – which is just pepper, nutmeg, cloves and ginger), juniper berries, mace, mixed spice, etc. These are spices that you often see being used when making potted meat.

Use the duck fat from your rillettes de canard for roasting potatoes or for frying up anything!

Do you like this recipe? Please give it a 5-star rating below!

And when you make it, share it on Instagram or any other social medium and tag me @azlinbloor and hashtag it #linsfood. Much obliged! … Lin ♥ 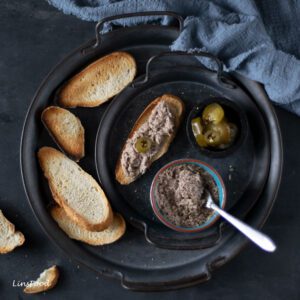 22 thoughts on “How to Make Potted Duck (Rillettes de Canard)”