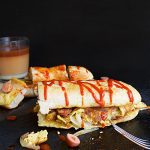 Roti John is a baguette omelette and onion sandwich from Singapore, traditionally served with tomato ketchup. A popular street food, it can also be filled with minced meat and cheese. Serve with a side of salad, and it’s a complete meal under 30 minutes!

Roti John, to many Singaporeans, is synonymous with the Singapore Botanical Gardens. This is because for years, the best Roti John was found at the (now closed) Taman Serasi Food Garden just outside said Gardens.

Roti, as you may well know, is the generic name for bread in many cultures, whether it’s flatbread or any other kind of bread. Legend has it that at sometime during the mid 20th century, a food stall owner was approached by an Englishman and asked if he could do him a hamburger.

Not quite knowing what he meant, despite the Englishman’s attempt at describing the hamburger, the stall owner beat together some eggs and onions and proceeded to make an omelette baguette sandwich but cooking the omelette within the bread. He then served this up with tomato ketchup on the side and said,

Sila = please do, please help yourself

John = all Caucasians were John!

Roti John was born, much in the same way we got Ayam Kapitan, the aromatic Nyonya chicken curry.

So the basic roti john recipe was, and still is, made with eggs and onions and served with tomato ketchup.

Not much later, minced mutton or minced beef was added to the mix and these days, you have cheese, sardines (local favourites in a lot of snacks!), pepperoni, the list is as long as the imagination! And it is served with a side of cucumbers, tomatoes, chilli sauce, tomato ketchup and more recently, mayonnaise.

You can make the Roti John as mild or as spicy as you like. Add some chopped chillies (green or red) along with the onions if you like, or some chilli powder, chilli flakes or even this homemade chilli paste.

I like to cook the meat before adding it to the beaten egg mix, that way, you don’t have to overcook the omelette later.

Season the meat and the egg mix very well to get the most flavour out of your Roti John, bearing in mind that the baguette is going to be as plain as can be!

Head on over to the Singapore and Malaysia page for more recipes from my childhood homes, both popular and forgotten, like the following:

♥ If you like the recipe and article, don’t forget to leave me a comment and that all important, 5-star rating! 😉 Thank you! ♥ 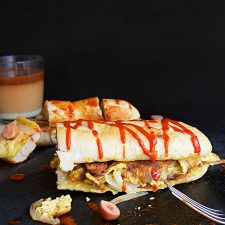 Variations on the filling

Time to make the Roti John