Cock-a-Leekie is a Scottish classic, a wholesome soup that is the perfect balm and sustenance you need on cold winter evenings. While its existence dates back to the late 16th century, with the first recipe in print being in 1598, the name “cock-a-leekie” itself didn’t come about until the 18th century.

What is Cock-a-Leekie Soup, you ask?

Take a look at the recipe and you’ll see that it’s all about the chicken and the leeks, although some food historians say that it started out with fowl and leeks which would go a long way in explaining why prunes are found in this rather deceptively unassuming soup.

My introduction to cock-a-leekie came about sometime in the early 1990s, when a hitherto unknown Scottish aunt paid us a visit in Singapore, regaling us with stories of cock-a-leekie, haggis, neeps and tatties! Yeah, trust me, with her accent, it might as well have been a different language! Neeps and tatties refer to mashed turnips and mashed potatoes that are traditionally served alongside haggis. Haggis? That’s a post for another day!

Cock-a-Leekie soup is popularly served as a starter on special occasions such as St Andrew’s Day and Burns Night, along with the aforementioned haggis, etc. Burns Night falls on the birthdate of the late Scottish poet, Robert Burns, and celebrates his life and all things Scottish with a night of Scottish food, Scottish whisky and Scottish music!

Todays’ recipe is a light broth, very rustic, with perhaps just some parsley for adornment but as you can see, I don’t even do that because I find the fresh parsley just overpowers this time-honoured soup. For that reason also, I choose to stick with the traditional recipe as much as possible, with none of the usual vegetables you’d associate with stews, because let’s face it, it’ll then be just another chicken soup, instead of one that’s characterised by the chicken and leek combination.

A little bit of rice or barley is added to the cock-a-leekie soup to make it more substantial; I personally prefer to use rice, but just a small amount. You could increase the rice or barley if you prefer a slightly more substantial soup. Bear in mind though, the soup is to be enjoyed with plenty of fresh buttered bread – yum! Butter, methinks, makes everything better! Not that this soup needs “bettering”! Having said that, you’ll see that I swirl in a dollop of butter after cooking, I love the depth it adds.

Now we mentioned prunes earlier, didn’t we? Prunes were added to the broth for 2 reasons; to add to both the nutrition and flavour of the soup after the long boiling process of the fowl. Many people aren’t fans of prunes and leave them out altogether or use them as a final garnish but I think they rather enhance the distinctive sweetness of the leeks in the dish. I add them, my husband just picks his out and leaves them on the side. If you have a similar prune hater in the family, drop the prunes in whole, that’ll make it easier to pick them out later.

The recipe also calls for a whole piece of chicken to be used, the chicken meat is then forked apart and added back. Of course, if you are not a fan of working with whole chickens, or perhaps don’t have a pan large enough, use chicken portions but make sure they add up to a similar weight of that of a whole chicken, about 1.5kg (3 pounds or so).

I think that’s all that needs to be said about this recipe, shall we get cooking?

Remember, lots of bread and lots of butter! 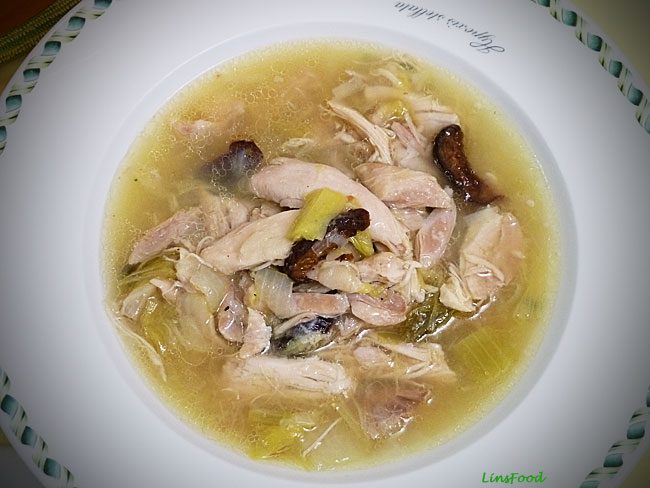 If you are using chicken portions, cook for only about 1 – 1 ½ hours.