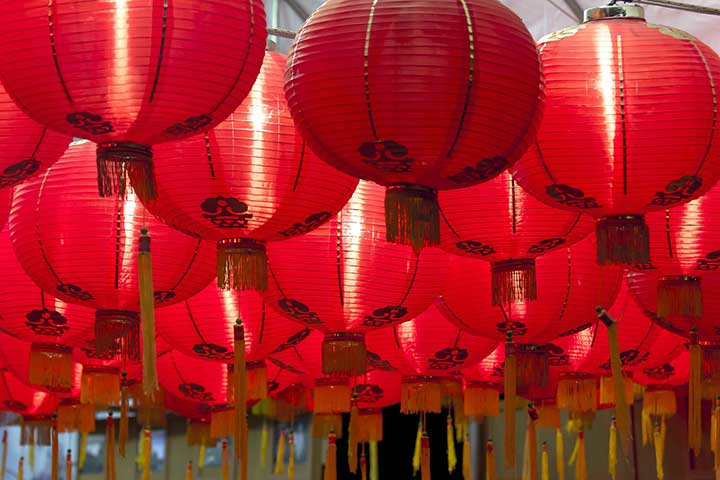 Chinese New Year is in fact celebrated “officially” all around Asia. What this means is that it is an official public holiday in countries like Singapore, Malaysia, Brunei and Vietnam, just to name a few, (and China, of course!). In Vietnam, it is called Tet.

Also known as The Spring Festival, it marks the end of winter and falls on the first day of the first month of the Chinese calendar (the Lunar calendar), and celebrations go on for 2 weeks. It usually falls between the 3rd week of January and the 3rd week of February.

As many of you might already know, each year in Chinese tradition is given the attributes of an animal, which follows the Chinese Zodiac (click to read more) system, as seen in the image above. It follows a 12-year cycle, and  the Chinese believe that the animal that rules your birth year has a profound influence on your character and destiny. 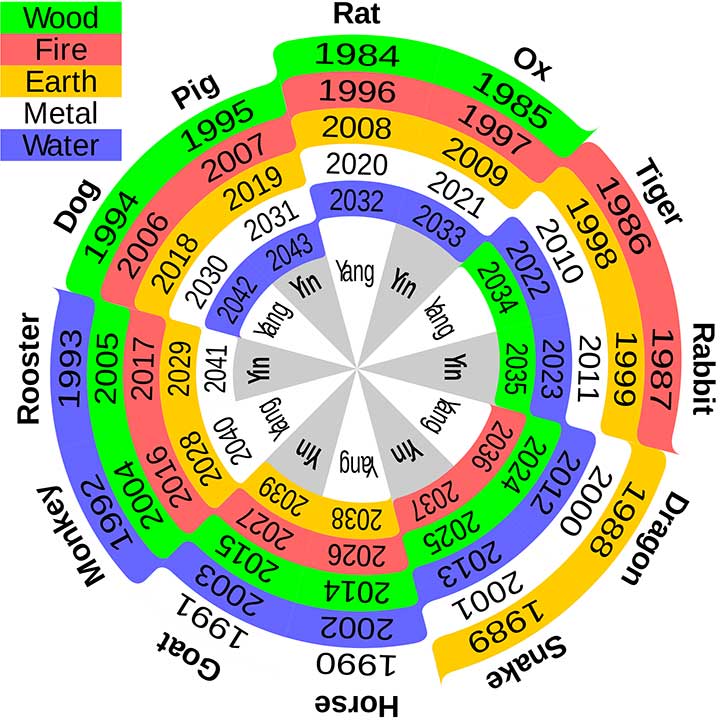 Symbolism in the Chinese Culture

I am constantly amazed at the rich symbolism found in the Chinese culture that is still so evident in the 21st Century. I know many cultures have their age old beliefs and traditions, I grew up with many (considering my multi cultural upbringing, I had more than my fair share!), but many of these customs and ideas get diluted over the years and end up having just a pedestrian role in people’s lives and festivities.

But not in the Chinese culture. 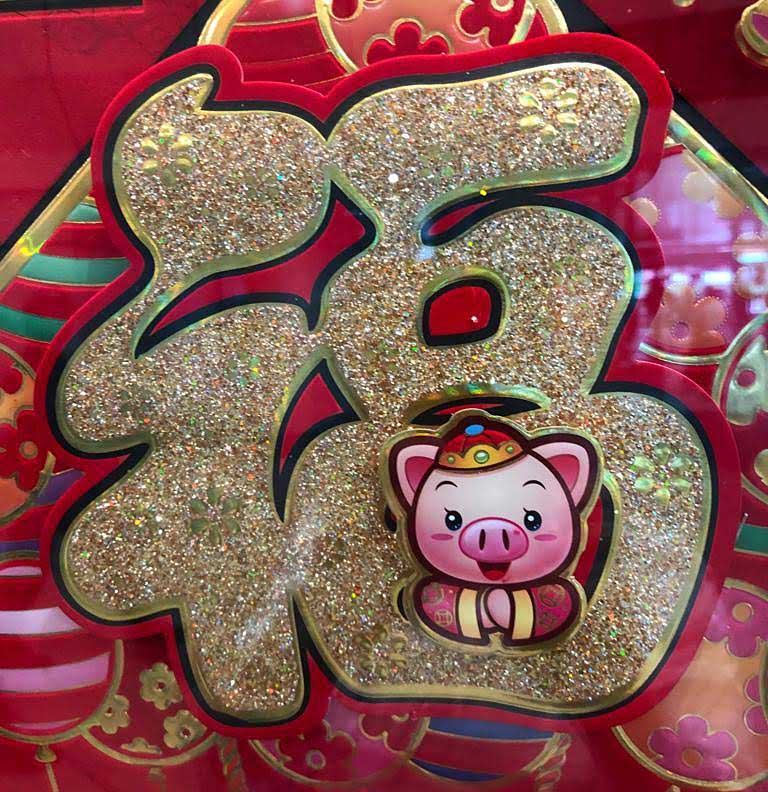 Meaning of the Upside Down Fu

The image above was taken by my cousin’s father-in-law, Dr Leong Poo Chow, in Singapore. The character Fu, means fortune and good luck, and can be written in many forms. It is often displayed upside down at entrances to homes. The idea being that good luck will pour down upon the family in that home. You can read more on Wiki, here.

Growing up in Singapore, I was fortunate to have been able to celebrate and experience first hand many religious festivals. Chinese New Year is just one of the religious public holidays celebrated in Singapore, the others being Eid, Christmas and Deevali. It is steeped in rituals and traditions, a lot of it is about sweeping away the old and ushering in the new good fortune.

Here are some more examples:

Red is a predominant colour in Chinese tradition as it wards off evil spirits, hence all the red decorations that spout out luck, prosperity, good health, etc. on the morning of the New Year, children and unmarried adults also receive a Hong Bao, a red packet containing money, from their elders. This is of course, very similar to presents at Christmas, and money at Eid.

The dragon symbolises prosperity and good fortune. On the 5th day, as part of the celebrations, you will find dragon dances being performed, especially in front of one’s place of business.

The food eaten during the Reunion Dinner is in huge quantities, representing the wish for “more” or abundance. Each dish at the table personifies one or more of:

Quite often a single dish has multifold symbolic connotations.

Dumplings resemble ancient Chinese ingots, therefore, they are a symbol of wealth and prosperity but the name itself has other messages.

According to my cousin’s wife in Singapore, the pineapple is an important food during the celebration. In Hokkien (a Chinese dialect), when the name is read, Ong Lai, it means fortune, the arrival of wealth.

My local Chinese grocer who is from China tells me that the pineapple is important because of its colour resembling that of gold. Which naturally means wealth. 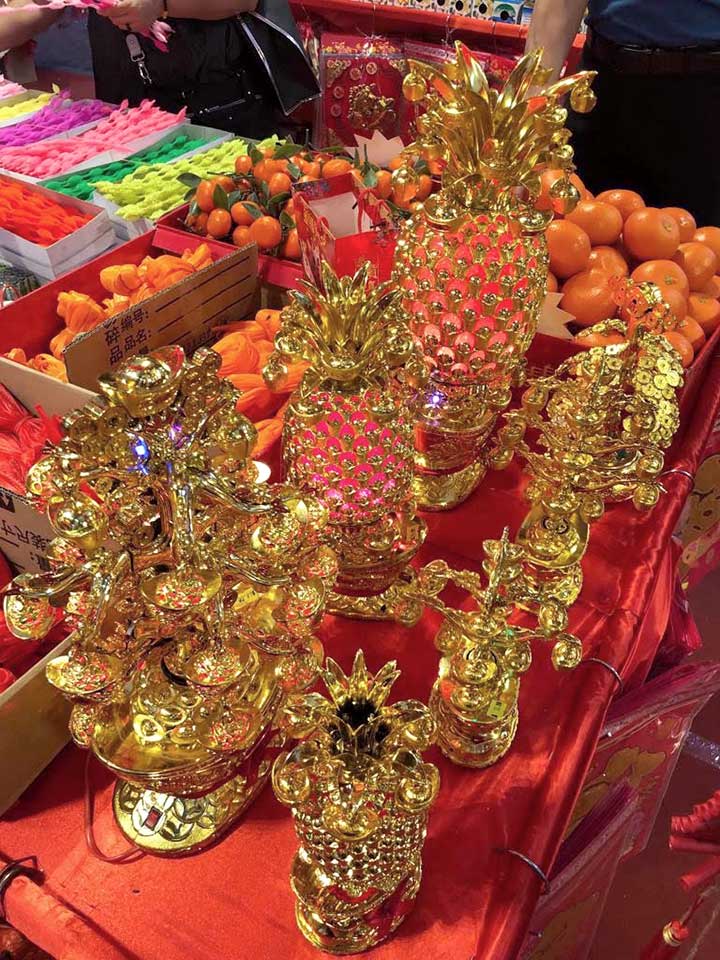 Pineapples signifying the arrival of wealth. taken by Dr Leong

This does depend on where in the world you live in and what your cultural tradition is. Many families in Singapore have steamboat. Outside of Singapore, this is more commonly known as a hotpot, specifically, the Mongolian Hotpot or the Japanese Shabu Shabu.

It’s like soup cooked from scratch in a fondue. My family and I absolutely love this. The kids call it a steaming bird bath! They love dishing up bits of food and soup out of the hotpot.

You start with stock that’s been simmering away all day on the stove. Then, at the table itself, everyone adds whatever they want to the pot: meat, seafood, vegetables. What you end up with at the end of the meal is a highly flavoured soup.

Besides that, you may have a noodle dish (symbolising longevity – so you don’t want to break them up!), rice , dumplings, fish, chicken, duck, tofu, tea eggs and various vegetables!

You think Christmas dinners are extravagant!

Below is a picture of our makeshift hotpot during a Chinese New Year dinner. That was the year our electric hotpot went belly up and blew out all the lights on the ground floor! Thank goodness for massive woks!

Ready for some delicious fun?! If you don’t habitually cook Chinese food, I promise you, you’ll be amazed at how easy some of the dishes are!

You'll find a wonderful collection of Chinese New Year recipes on this page. From the traditional to the not so traditional. Everything you need for a delicious Reunion Dinner or for having friends over, with recipes from East and South East Asia and the odd eclectic choice from around the world. 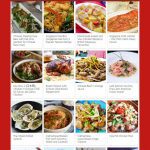