General Tso’s chicken, is, apparently, one of the most popular Chinese takeout dishes in the US, consistently making the number one spot in many polls and reports, like this one done by NBC News. It is a delicious combination of lightly battered chicken in a sweet and tangy sauce laced with chilli.

Purportedly named after General Zuo Zongtang, a 19th century Chinese general, General Tso’s chicken is said to be from Hunan in China. You will, however, be hard pressed to actually find this dish in Hunan, or any proof that it was named after said general.  For one thing, folks in Hunan will tell you that it is too sweet, and nothing like the dry and spicy dishes of the Hunan province.

According to Fuchsia Dunlop, in her The Revolutionary Chinese Cookbook, the dish was created by Peng Chang-kuei, a Chinese chef, who fled to Taiwan after the civil war, then to New York in 1973. Peng’s original Hunanese General Tso’s chicken was nothing like what it is today; it was hot, sour and salty.

Recognising the need to cater to his American customers, Peng altered the recipe by sweetening it and cutting back on the chilli. This became such a huge hit that it has long been an American favourite and is widely regraded to be an American Chinese recipe, much like Egg Rolls. Henry Kissinger was supposed to have been a big fan, so how can it not be?

There is a certain irony linked to the General Tso’s chicken legend. As a nod to perhaps Peng’s Hunanese roots, Chinese chefs have, for a decade or so now, started to include this dish as part of Hunanese cuisine, even if it doesn’t, in any way, resemble Hunanese flavours.

Here, I’m sharing with you, my recipe for General Tso’s chicken, the way I teach it in my classes.

How to Cook General Tso’s Chicken?

There are, a few steps to the recipe. I’m writing them out here, the way I do in my class, so you get a clear idea of what you have to do:

Sounds easy when broken up in steps, doesn’t it?

The whole process is pretty straightforward. When you’ve made it once, you can play around with the sauce to your heart’s content, to make it spicier, more or less sweet and increase or decrease the tang.

While we all go for chicken breast because it is a leaner meat and quick to cook, chicken thighs are your better option here. Let’s face it, with that frying, this is no diet food. So go with thigh meat, as it is more flavoursome and doesn’t dry out with the 3-minute of frying. Chicken thigh meat, off the bone, cut in bite size pieces, is very quick to cook.

Alcohol in the Marinade

I love adding a little bit of vodka when making batter or pastry. It increases the amount of liquid in your batter/pastry, without making it too tough as part of that liquid is alcohol, which will cook off to some extent. The result is a lighter batter/pastry. But that’s a matter of preference, and I’ve listed the alcohol as optional.

Egg White in the Marinade

Egg white in the marinade allows the dry coat to cling better and also adds to the crunch. However, as my girls, are allergic to eggs, I always do a separate portion of eggless General Tso’s Chicken by omitting it in the wet marinade. It’s still delicious.

Baking Powder in the Dry Coat

Adding baking powder does create a lighter batter, but in my opinion, not necessary because that lightness is completely lost once that batter takes on the sauce. Kind of also the reason why you can skip the alcohol in the wet marinade too!

We use 2 types of soy sauces in this recipe: light and dark. To read up more on soy sauces and the different varieties, go to the page on Soy Sauce.

It contains ingredients to create a sweet and sour sauce, with a hint of heat. When I cook sweet and sour dishes, I always add some tomato ketchup to it. I learnt this from my mum and my grandma.

My granny used to also add some tomato ketchup to curries as a flavour enhancer, a trick I’ve copied. So you’ll find tomato ketchup in the sauce for this recipe. Together with the vinegar, you get an amazing level of tang.

If you fancy more Chinese recipes, head on over to the Chinese page, as well as the Singapore and Malaysia page for goodies like: 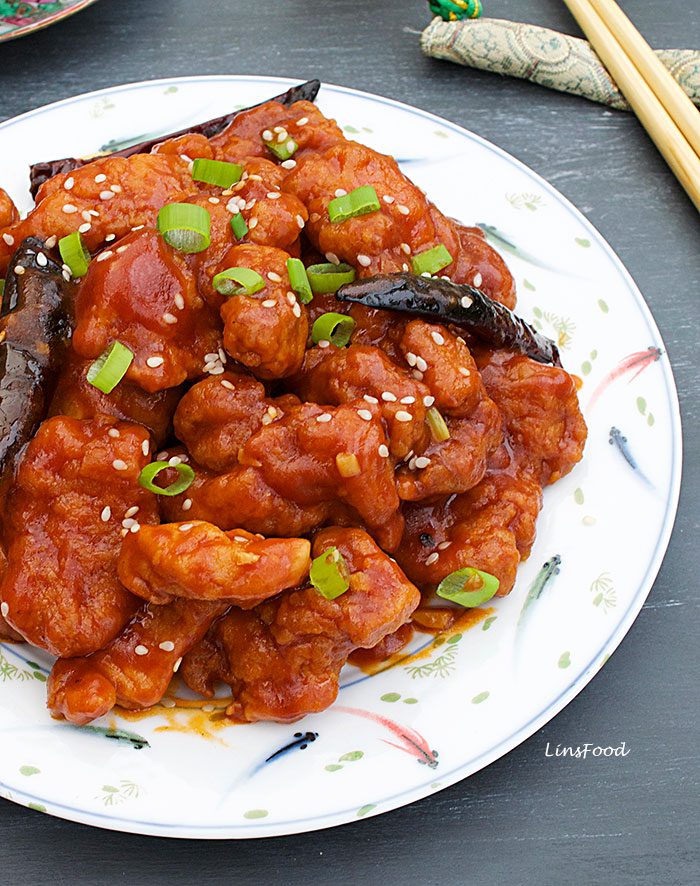