Ayam Masak Lemak Cili Padi is a traditional Malay chicken curry that is said to be from the Malaysian state of Negeri Sembilan. I am not altogether certain of its origin because I see this curry all over Malaysia, as well as in Singapore and Indonesia. Of course, that can also mean that, like any other favourite, it travelled well.

Lemak = cream/creamy. In culinary terms, it refers to the use of coconut milk

Negeri = country in Malay, but in this instance, it comes from the Minangkabau dialect, nagari, which means villages

Cili padi (cili api) = bird’s eye chilli (because they are tiny, not quite like rice grains, but small)

Here is an image of the Royal Mosque of Seri Menanti (Masjid Diraja Tuanku Munawir), full of Moghul infuence, not quite Minangkabau! Located in the state’s royal town of Seri Menanti, the mosque is next to the Old Palace and the Royal Mausoleum.

Negeri Sembilan, as mentioned above, is a Malaysian state. It lies on the west coast of Peninsular Malaysia (West Malaysia), and is between Kuala Lumpur and Malacca. The state’s name is believed to have come from the old Minangkabau language, referring to the 9 villages that migrants settled in. The Minangkabaus are a group of people from West Sumatra (Indonesia) and if I remember my South East Asian history, they settled in parts of Malaysia, especially in Negeri Sembilan in the 15th century. This was during the rule of the Malacca Sultanate.

The Malay spoken in Negeri Sembilan

The Malay spoken in Negeri Sembilan, has been greatly influenced by the Minangkabau, and is known as Bahaso Nogori. There are many differences in words, pronunciation and inflection in the Malay spoken all over Malaysia. I was always a little amused whenever my dad (who was Malaysian) would adapt his Malay according to who he was speaking to. It was fascinating. My stepmum is the same.

What does Ayam Masak Lemak Cili Padi taste like? It’s a chicken curry whose predominant flavour is that of turmeric and coconut milk; turmeric is what gives it the yellow hue. So, it’s creamy from the coconut and a touch musky and earthy from the turmeric. And spicy! Naturally, you can always reduce the heat level, but more of that below.

Use whatever cuts you like. When I was growing up, we would always get a whole chicken at the market, and get the vendor to cut it all up for us. But I have long preferred a combination of cuts: thighs, drumsticks and breasts, and a mix of on the bone and off. When you are making curries or stews, you have to use chicken on the bone, as the bones lend depth to your sauce/gravy, ready made stock source.

The name says cili padi or cili api, that means bird’s eye chilli. If you habitually cook with hot chillies, great. If not, just use 2-5 jalapeños, depending on your tolerance. If even that is too spicy, use capsicums (bell peppers), that way, you get the fruity from the chilli, but not the spice.

So play around with the number and type of chillies to suit your taste. You can use any type of bird’s eye chilli, if you are sticking with the theme. I’ve grown a few types over the years, like Thai Demon and Piri Piri, and have used both.

I’ve eaten this Malay curry many times without any aromatics; no lemongrass and no other herbs like Vietnamese coriander (daun kesum) and Kaffir lime leaves.

Lemongrass – Click here to read more. I would think that this is pretty easy to come by these days. Skip it if you can’t get it. We only ever use the bottom half of a lemongrass, where the aroma and flavour is concentrated. In this recipe, we bruise the base of the lemongrass. That means, bang down hard with the back of your knife, see the image above.

And don’t hate me, but I’m using kaffir lime leaves because I have a kaffir lime plant! But I’ve listed it as optional.

Click here to read more. A very popular souring ingredient, as well as snack in many cuisines, tamarind can easily be substituted with lime juice or clear vinegar. Lemon juice, to me, doesn’t quite have the rounded flavour of these two.

Click here to read more on how to cook with coconut milk. Fresh coconut milk is always best but many of us outside of Asia, unfortunately, do not have this luxury. As with any ingredient, get the best that you can afford, the same goes for coconut milk. Get the one that has the least added ingredients – just coconut milk and water is the best.

If you do have access to freshly grated coconut or frozen grated coconut, you want to get your coconut milk in 2-3 pressings. Head on over to the link above to read more.

That’s it, let’s get cooking. Have you tried a Malay or Indonesian curry before? 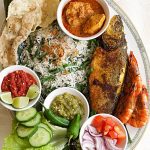 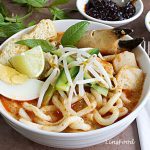 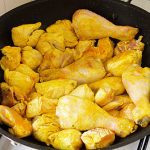 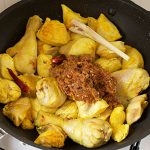 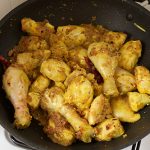 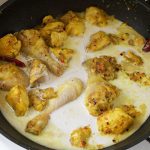 ♥ Do you like this recipe? Please give it a 5-star rating below! And when you make it, share it on any social medium and tag me @azlinbloor. Terima kasih! ♥

Recipe for Ayam Masak Lemak Cili Padi, a traditional Malay coconut chicken curry that is said to be from the Malaysian state of Negeri Sembilan.

Ingredients to be ground