Skip to content
Borani Laboo is a dreamy, creamy Persian recipe of beetroot in yoghurt. It can be eaten as a dip or a condiment in a meal, much like raita.
Jump to Recipe Print Recipe 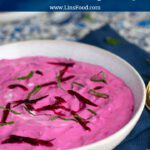 Borani Laboo is a beautiful and bright pink Persian yoghurt dip that doubles as both a side dish and a dip that is at home on any mezze table.

What’s in a Name?

In Farsi (the Persian language, also the lingua franca in Afghanistan):

Boorani-yeh Laboo = Yoghurt and Beetroot (could even be taken as just Beetroot Yoghurt, with beetroot being used as an adjective).

Legend has it that the word borani traces its origin to the mid 7th century during the Sassanid Empire, the last Persian Dynasty before the advent of Islam.

Its creation is attributed to Purandokht (629-632), the first of only two female rulers in Iran’s history. This empress was apparently very fond of the cold, strained yoghurt dishes that her royal chef used to prepare especially for her. So much so, the dishes were named poorani, after Her Royal Highness.

After the Muslim conquest, this word naturally became boorani because the Arabic alphabet doesn’t have the soft sounding “p”. There are many types of boorani, or borani, as it is more commonly spelt in English, and today’s boorani-yeh laboo is one of my favourite of the lot.

I mean, just look at that colour!

Borani Laboo, like all the other Persian yoghurt based dishes, is very easy to prepare. This is how it’s done:

However, on very hot summer days, I skip the cooking of the beetroot altogether. I know, I know, many of you traditionalists are probably going “noooo”, but hey, don’t knock it until you try it!

I rather like the sweet, crunchy nature of the grated beetroot contrasting with the creamy yoghurt. Almost like the walnuts in Mast-o Khiar, the other borani dish I have on this site.

So I’m giving you both versions in the recipe card below. Cook your beets if you prefer, for an all around soft and creamy experience, or leave them raw and crunchy. Just don’t tell your Persian مامان بزرگ (grandmother)!

Traditionally, borani dishes were served as part of a meal as side dishes. Their creamy nature is the perfect complement to savoury rice and stews. This is still the case, especially during the colder months. So you can serve it with any of the rice dishes found in Persian and Afghan culture, and also alongside stews. See the gallery below.

But today’s borani laboo, like other borani recipes, can also be served as part of a mezze meal or appetiser table. It can be eaten as a dip with the usual suspects, be they crudités, dry finger foods or crackers and chips.

This beautiful pink yoghurt dish will also make an extremely attractive starter, served with any form of flatbread. The Levantine Manoushe comes to mind immediately. And you know what would also be good with this Persian yoghurt dip? Focaccia!

So many ways to enjoy it!

And now, shall we get our aprons on?

Recipes to Serve with Borani Laboo

Kabab Koobideh (lightly flavoured Persian Kebabs)
Kabab Koobideh, a beautiful, lightly spiced, herby (if you want it to be), Persian kebab. Traditionally, these are fashioned as long, cylindrical kebabs wrapped around flat, sword like skewers, which can be barbecued, grilled or even cooked in an oven.
Check out this recipe If Cooking the Beetroot

If not Cooking the Beetroot

Putting the Borani Laboo Together