Lamb Shank and Rhubarb Tagine, an original recipe that draws inspiration from the Persian Khoresh Rivas, which is a rhubarb and meat stew. Perfect spring recipe!
Jump to Recipe Print Recipe

This Lamb Shank and Rhubarb Tagine is a deliciously tangy tagine, full of sweet and sour flavours that complement the lamb so perfectly.

For today’s Tagine Masterclass recipe, I drew inspiration from an old Persian family favourite, Khoresh Rivas, or Rhubarb Stew. The Persian rhubarb stew is pretty simply flavoured, with just a few ingredients, and I’ve tried to keep with that theme for this Lamb Shank and Rhubarb Tagine dish as well. So we’re going with flavours that will both complement and contrast with the sweet and sour nature of rhubarb.

As it’s spring time here in the northern hemisphere, both lamb and rhubarb are in season, so what better time to make this tagine recipe then now? I happen to have a whole lot of rhubarb at home, and have been playing around with it in the kitchen quite a bit.

This Lamb Shank and Rhubarb Tagine is a delicious pot of meltingly tender bold meat, that’s complemented by the sharp and sour rhubarb, the sweet tomatoes and all the flavours further enhanced and brought together by the sweet and a touch sour apples. Some bread, in my opinion, is the best way to enjoy this complex mixture of flavours. Couscous, rice or even pasta will be the next best thing!

Can you use other Cuts of Lamb?

Yes, absolutely! Today’s Lamb Shank and Rhubarb Tagine recipe can be cooked with other parts of lamb suitable for stews. Something that benefits from low and slow cooking is what you want to go for.

Shoulder or leg is always going to be perfect and you can have it diced too for easier eating. I, however, am a huge fan of lamb shanks; they are not very fatty, and while tough in their natural form, are amazingly tender and falling off the bone when cooked for a long time, as we are doing here in this tagine recipe.

I add some pomegranate seeds right at the end, merely for aesthetic purposes, as they are my go-to food bling. You can omit them, use almonds, pine nuts or nothing at all, apart from the parsley. If you are using fresh pomegranate seeds, the juice that you get when squeezing out the seeds will be great added to the tagine right at the end, as a natural sweetener, further enhancing the varied flavours of the dish. But only 2-3 tablespoons, no more.

Do you need a Tagine Pot?

Nope, absolutely not. If you do not own a tagine, you can make this recipe in any casserole type dish, a dutch oven or even a regular old saucepan. And the recipe will also work in a slow cooker. Just follow the steps as detailed here, and turn your slow cooker on!

Vegetarians, I hear you. Next Tagine Masteclass recipe will be a vegetarian one. See gallery below for the okra tagine. In the meantime, if you would like to omit the lamb here, you can, and substitute with potatoes and carrots.

For more tagine recipes, be sure to visit the Tagine Masterclass page, for amazing stuff like: 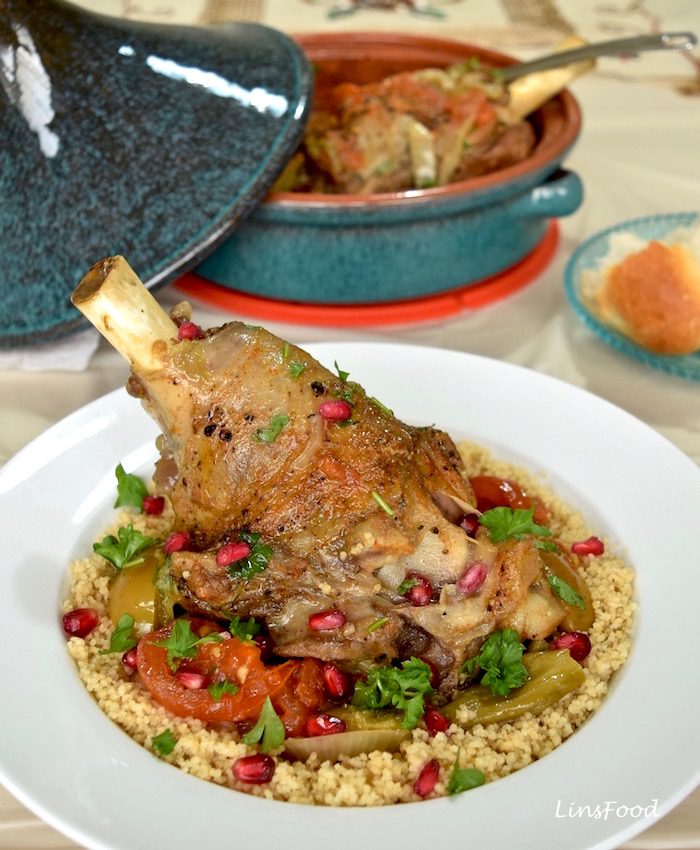 To Cook in the Oven

Total time does not include marinating time.