Mahalabia, also known as Mahalabi and Muhallabia is a Middle Eastern dessert of slightly sweetened cooked milk that is flavoured with rose or orange water. Very much like Blanc Mange, it is extremely easy to make, takes only a few minutes, then placed in the fridge to cool.

One of the most popular recipes on this site is my old, traditional Mahalabia recipe. It regularly gets picked up or featured on Middle Eastern and North African websites and publications, especially during Ramadan.

For a long, long time now, I’ve wanted to do variations of it, and this Mango Mahalabia with a touch of Sumac, is the first of a few that I have in mind.

Why Sumac? When I first settled on mango for this mahalabia, I started thinking of spices and other flavours that would go with it. Cardamom is traditional but I decided to leave that out as I wanted to deviate a little from the traditional flavour.

Sumac came to mind as it’s one of my favourite spices and I figured that its spicy, lemony aroma would certainly go well with the mango.

Sumac is usually a spice used in savoury dishes. Click here to read more about it and its substitute. On this site, there are many, many recipes that use sumac, like Musakhan (Palestinian Chicken and Bread recipe), Turkish Shepherd Salad and the Lavender and Sumac Roast Chicken.

I don’t think I’ve come across it being used in sweet recipes, other than in my kitchen. But I’m sure when this recipe hits the stands, it’s going to start a trend! But you know what they say, imitation is the sincerest form of flattery!

This Mango Mahalabia is super easy to make, this is what we’ll be doing:

The first time I made this, I held off on the sumac, until the end, just to see if the recipe needed it. While the mango mahalabia was delicious, there was definitely something missing from it. So, in went the sumac, a pinch at a time, until I was satisfied.

You can’t taste the tang from the sumac but what you do get is a more well rounded creamy, fruity flavour. If you can’t get sumac, just substitute it with 1 Tbsp of fresh lemon juice, mixed into the cornflour (cornstarch) paste.

It’s creamy and fruity with a wonderful hint of lemon from the sumac.

And as I tasted the final chilled product, I was reminded of an old forgotten but favourite childhood dessert by an aunt in Singapore. She used to make custard with evaporated milk and peaches, and this definitely shared similar notes, especially the evaporated milk.

That’s Auntie Rehana, in the picture below, second from the left, with her siblings, cousin and mum (my granny). My mum is to the extreme right. This picture was taken sometime around 1960, give or take, judging by my youngest aunt’s age (the baby). Incidentally, my granny made all those dresses worn by the young ladies.

If you enjoy the recipe, drop me a comment and let me know. And if you are feeling like a star, don’t forget that 5-star rating! 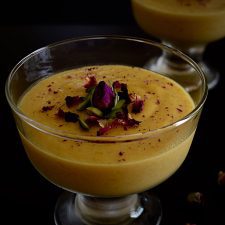 Mango Mahalabia with a touch of Sumac

The total time does not include chilling time.

52 thoughts on “Mango Mahalabia (Muhalabia) with a touch of Sumac”