Skip to content
Rompope, to put it simply, is Mexican eggnog. It’s aromatic, it’s indulgent and so, so satisfying!
Jump to Recipe Print Recipe

Rompope, to put it simply, is Mexican eggnog. It’s aromatic, it’s indulgent and so, so satisfying! But, unlike its American cousin, Rompope is made with milk, so while exquisite in taste, it isn’t quite as rich.

Legend has it that it was first concocted and made famous by 17th century nuns at the Santa Clara convent in Puebla, Mexico. Today, it is a popular drink not only in Mexico but throughout Central America and is very easily available commercially all through the year in these countries.

I have a wonderful bunch of Latina friends here and every holiday season, they take turns hosting a Christmas party. I always look forward to it, because it usually comes 2 – 3 days after our Open House and it’s nice to have a break. Know what I mean?

Over the years, we’ve had a few different types of Rompope from these ladies, the biggest difference is the use of (or lack of) ground almonds in the mix. I leave out the almonds in ours, preferring the lighter taste without it.

Rompope is quite often served chilled, but on cold winter days, it is absolutely delicious heated up and warms your body through and through – especially if you top up on the brandy! Given its lighter nature, I think Rompope is perfect as a pre-dinner drink or for cocktail hour, provided it’s a whole 30 – 60 minutes before the food is served. Serve in little sherry sized glasses – it’ll keep them coming back for more!

TIP – this recipe uses egg yolks, what to do with the whites? Make some meringues, of course! Egg whites freeze well, so you can always use them another day.

TIP – I only use 6 egg yolks in this recipe, resulting in a pale and creamy drink. Some people will use as many as 20 with the same amount of liquid you find here, giving you a yellow drink with a richer flavour. If you enjoy this recipe, you can always experiment with the number of egg yolks over time.

You will also need 1 or 2 bottles or jugs with lids that have been sterilised, to hold the Rompope when it’s done. Depending on how much brandy you add to the mix, you will be getting about 1 litre (4 cups) of Rompope.

Make the Rompope Ahead

It is best made at least a week ahead, for the flavours to mature, although freshly made tastes awesome too. One of my friends makes it a whole month ahead, I have personally only gone for a week. 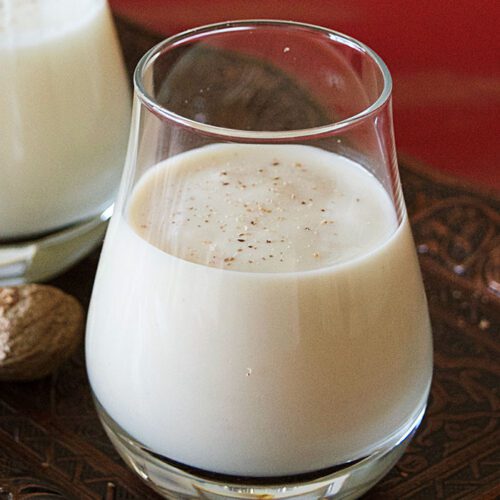 22 thoughts on “Rompope, a deliciously creamy Mexican Eggnog with Brandy”