Taboon bread recipe, a soft, almost chewy flatbread that's used as a base for Musakhan and to wrap, as well as fill like pita bread.
Jump to Recipe Print Recipe 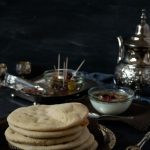 Taboon bread, also known as Lafah bread (and probably a few other names too), is found all around the Middle East in various manifestations.

It is, as I’ve posted before, the bread used for Musakhan, it is the bread used to wrap Shawarma and is also quite, often stuffed with falafel and humus. You can split it to fill it, or you can use it as is.

It is soft, with a slight crunch and just full of the aroma of fresh yeasty bread!

While I had eaten taboon bread many times before, it wasn’t until a trip to Egypt many years ago, that I came to fully appreciate it.

The word taboon refers to the oven used to bake the bread, and is a tradition that goes back to biblical times.

It can be either an underground oven or an above ground, dome shaped clay oven. I was travelling with a Palestinian friend and was visiting her family when I first came across the taboon (or tabun).

I was completely captivated by the whole process – the floor of the oven was covered in large pebbles (I think she said they were made of marble) which were above smouldering hot coals. The flatbreads were placed directly over the pebbles to cook, resulting in indentations on the underside of the bread.

And it is these indentations, or bumps that is the hallmark of a taboon bread.

On that particular trip, besides the bread, there were also a couple of other types of food in metal containers cooking along in the taboon. Brilliant, really.

Baking Taboon Bread without a Taboon

Now, unless you’re cool enough to have a pizza oven, we are just going to have to do our best with an ordinary one! There are so many ways to try and recreate that charred, smoky flavour that comes from using an oven like that.

When I first started making taboon bread, I would line a baking tin with some ceramic baking beans and place the bread over it before baking. See image below.

But over the years, I got lazy and dispensed with the beans, and just bake it on a pizza stone.

But what I do these days though, is just before I place the taboon bread in the oven, I create indentations on the bread with my knuckle. Use the end of your fingers like when making focaccia, if you don’t have long nails.

This is such an easy flatbread recipe, you only need a small amount of hands on time.

While taboon bread is delicious eaten freshly baked, it will keep for 2 days, if stored in an airtight container. As it’s meant to be a fairly soft bread, I just heat it up in the microwave oven. Because I’m soooo lazy! 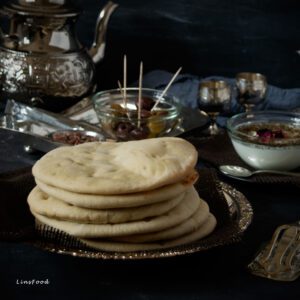