Toasted Rice Powder adds a wonderful nutty flavour and aroma to any dish you add it to, and is an essential ingredient in South East Asia. It’s a very quick and easy process and because the toasted rice loses its potency fairly quickly, it’s best done as and when needed. I usually make a tablespoon or two as needed for the recipe and the number of diners.

What is Khao Khua or Toasted Rice Powder?

Khao Khua or toasted rice powder is just rice, quite often sticky rice (above), pan toasted, cooled, then pounded to a medium to fine grind. It really is just like pan toasting dry spices for your Indian recipes. Ordinary rice, arborio (risotto), bomba (paella), any white or even brown rice will do just as well if you don’t have access to sticky rice or glutinous rice.

It is used in salads like larb (laab), in soups as well as dipping sauces. Not only does it add a nutty, smoky flavour to your dishes, it also adds a pleasant texture and as far as soups go, it acts as a mild thickener.

In Myanmar (Burma), instead of toasted rice powder, they use toasted rice flour, which when you think about it, is practically the same thing! Take a look at my Burmese Recipes Page.

The consistency of your toasted rice powder is really up to you, some folks like a pretty fine grainy powder but I like to go for a coarser grind, what I call “medium fine”, almost like sesame seeds. I love the additional layer of texture the toasted rice ground this way gives to my recipes.

As for the doneness, we’re going for a golden brown colour, don’t worry if not all the grains are the same golden brown, some may be darker, some may be lighter, that’s perfectly fine. But do try to go as far as you can with the lighter ones without the darker ones burning! It should take you a good 10 – 15 minutes on medium low heat, depending on what your medium low is! Say your cooker has 8 heat levels. 5 & 6 would be medium high and 3 & 4 would be medium low. Got it? It’s rocket science, isn’t it?!

In a coffee or spice mill. But be careful not to overdo it, pulse a few times, mix with a spoon, pulse again, until you get the desired consistency. As mentioned, I like a coarser grind. You could also go with the pestle and mortar if you prefer, just be ready to brush up all those rogue grains that went a-flying! Or get your kid to do it, like I do!

You’ll find toasted rice being called for in some of the recipes on this site, for example, I use it in Larb Salmon Ceviche, a recipe that will rock your tastebuds!

So, there you have it, the long and the short for why you need to make your own Toasted Rice Powder! Don’t be tempted to make a whole cupful to store, it’s such an easy process, make a tablespoon or two as and when you need it. Its aroma starts dwindling after a couple of days and before ya know it, 2 weeks, a month would’ve gone by, at which time you’ll have to bin the whole lot! Know what I mean?

Let’s get our aprons on! 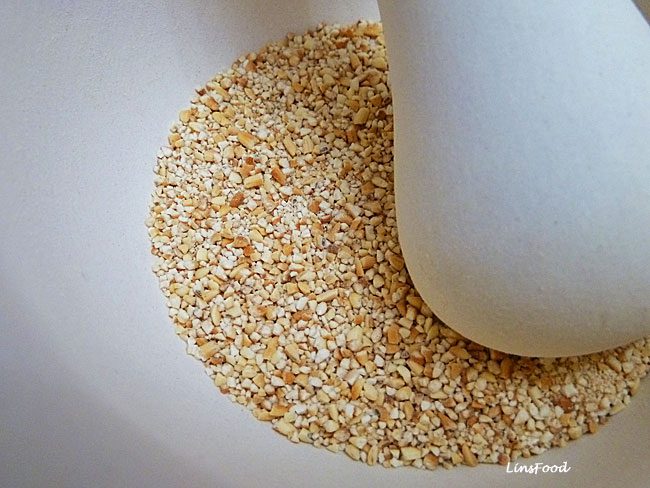