What are Australian Finger Limes?

The Australian Finger Lime (Citrus australasica), as its name suggests, is native to Australia, specifically, the rainforests of SE Queensland and Northern New South Wales.

It is one of a few native lime varieties of Australia, and arguably, the most well known. When cut open, finger limes release tiny little citrus sacs, that are just bursting with flavour.

In its natural habitat, the finger lime plant can grow to be a 6-metre tall tree. It is extremely thorny, with the thorns being rather long and very sharp. There were many ouch moments over the last few months as I attempted to prune or rid my plant of those pesky red spider mites!

Australian finger limes come in different sizes, shapes and colours. They can range from about just 3cm long to about 12 cm (5″). These are some examples of varieties available:

Definitely citrusy! Tart, with a touch of bitterness, and just a hint of sweet. Personally, I think it’s almost like a cross between a Persian lime and a young grapefruit, with some lemon basil thrown in.

I just love how the tiny pearls burst in your mouth, releasing a shot of tangy, zingy flavour, as you bite into them unsuspectingly.

How to use Caviar Limes?

I personally think that they are best used as they are, fresh, as a topping, a garnish or a final flavour enhancer. I’ve seen a few recipes out there for cakes and such, but I reckon you are doing the finger lime a big disservice by cooking it. Its aroma and flavour get lost once cooked.

Caviar limes are best enjoyed raw, and to me, have a special relationship with seafood.

Here are just some ways that I use them:

Caviar lime would go perfectly in any of the recipes below, used as a garnish or, in the case of the ceviche, ingredient and garnish, alongside whatever lime you are using.

Scallop Ceviche (a 5-ingredient Ceviche)
This 10-minute Scallop Ceviche recipe, with its tingling, citrusy, and a touch boozy marinade, is simply exquisite!
Check out this recipe

Smoked Salmon Salad (with Orange and Marinated Artichokes)
This smoked salmon salad is a treat for all your senses, with oranges and marinated artichokes. An easy party salad to please all your discerning guests!
Check out this recipe

The card below tells you how to use the Australian Finger Lime. For recipe ideas, look above. 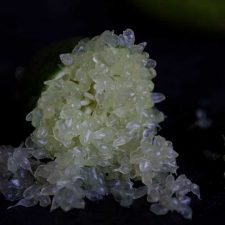 How to Use Australian Finger Limes (Caviar Limes)