Skip to content
Find out all about Mexican oregano, Lippia graveolens, and how to use it in your kitchen and how to store it.
Jump to Usage Instructions Print Instructions 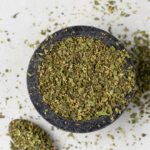 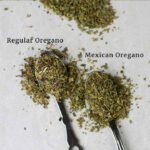 Mexican oregano is not the same as Mediterranean oregano. It’s a herb that is native to the US Southwest, Mexico and Central America.

What is Mexican Oregano?

Mexican Oregano is a very popular herb in Mexican cooking. It is widely used in Mexican and Central American dishes, as well in TexMex dishes. Whether it’s stews, antojitos or pickles, this oregano makes its presence known.

It has a grassy and earthy aroma with citrus undertones. To me, it is slightly stronger in flavour to the more common Mediterranean oregano, which leans towards minty and sweet.

In fact, its botanical name, Lippia graveolens, refers to the fact that it has a stronger nature. Graveolens is derived from the Latin gravis, which means heavy (oleo is oil).

You get a wonderful herbal depth when using it in your dishes.

Mexican oregano is an unruly shrub and can grow to over 5 feet tall. Its leaves resemble that of mint a little and it bears small clusters of white or yellow flowers from Spring through to Autumn. These flowers are followed by small round fruit.

At the time of writing, it’s summer 2021. I shall have to source out the seeds for next year!

No they are not, they belong to 2 different plant families. Mexican oregano belongs to the Verbenaceae family (vervain) which also includes the more well known lemon verbena.

Mediterranean oregano, on the other hand, belongs to the Lamiaceae family, which includes a host of other common herbs like basil, sage, mint and perilla.

And as mentioned above, although they both have grassy and herbal aromas, the Mexican oregano is stronger than its Mediterranean counterpart, with citrus notes as opposed to minty.

How to grow Lippia Graveolens?

It’s a pretty easy herb to grow. You can do so by seed, cutting or division. It likes full sun but it will tolerate a little shade.

It’s a sub tropical plant, so if you live in cold climes, you’ll need to grow it in a container. This is so it can be brought indoors when the temperatures dip.

Since it bears a resemblance to regular oregano and marjoram, you could just go ahead and use either of these as a substitute. Perhaps a squeeze of lime or lemon juice just for that hint of citrus, depending on what you are cooking.

Where can you buy it? Hit that search button. Here in the UK, we have a few online sellers that stock it. I get mine from Spices on the Web, a great source for all sorts of ingredients from around the world, as well as chilli seeds and plants.

And there you have it, next time you’re cooking up some Mexican or TexMex, you know which oregano you should be going for! 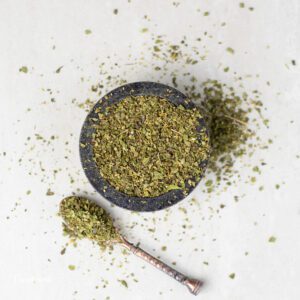 How to use and store Mexican Oregano

With a Pestle and Mortar

How to Store Mexican Oregano