Skip to content
Recipe for Native American frybread, or Indian frybread and a look into its history. You get a bonus recipe for taco meat too, to make Indian taco!
Jump to Recipe Print Recipe 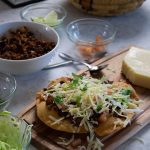 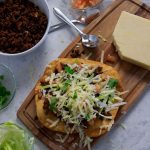 Native American frybread, or Indian frybread, is a rather contentious subject. Essentially, frybread is a simple, chewy flatbread made with white flour, which is then fried in oil. It can be eaten as is, with something sweet like sugar or honey, or served up taco style, hence the name, Indian taco.

Today’s post is unchartered territory for me. While I have eaten the odd home cooked Native American fare when I was living in London, I know next to nothing about it. So let me tell you why I’m doing this post.

Recently, a fellow blogger friend of mine and I decided to work together, creating posts with a common theme. Monika and her husband, Petar, are travel bloggers over at TravelWorldOnline. The idea is that they would talk about a place they’ve been to, and a related food, and I do the recipe. Sounds good, doesn’t it?

So this month’s collaboration is the Indian frybread, Indian as in Native American. It is essentially flattened, fried dough and bears a huge similarity in its ingredients to so many flatbreads around the world, notably the (south Asian) Indian paratha.

To write up this post, I had to look up a whole lot of different sources, because don’t forget, I was starting from zero. I needed to get a feel for the Indian frybread, where it came from, how it came about and what it means today.

One of the first things I did was to get my hands on The Sioux Chef’s Indigenous Kitchen, a goldmine of information and Native recipes that are stylishly presented. However, to my surprise, what it didn’t have, was a recipe of frybread! But more of that later.

Other sources I looked up included PWNA (Partnership with Native Americans), Smithsonian Magazine, NBC News, What’s Cooking America, Indian Country Today, and a few other “smaller” sites. I wasn’t really interested in the actual recipe itself, which is as basic as you can get. It was the story that I was after. And that, let me tell you, made for some very interesting reading, which I’ve tried my best to condense.

As mentioned right at the start, frybread is controversial. While many (most?) Native Americans are happy to embrace it as a traditional Native food, there are some who reject the idea.

So how did frybread come about and why is it so contentious?

Frybread was created in the mid 19th century on an Indian reservation, by the Navajo people. This was a time when many Indians in the South East and the South West were relocated from their lands by the US government against their will.

The forced removal of the Navajo tribe from their lands in the South West to the Bosque Redondo Reservation became known as The Long Walk. In the dead of winter, many were killed as they made the 300-mile, 2-month long trek to the internment camp in New Mexico. You can read more about The Long Walk here.

It was in this overpopulated reservation, that the frybread was born as a means to an end. The Indians had to make do with whatever basic rations were given to them, so as not to starve. Gone was their diet of fresh foods obtained from the land, to be replaced by the unhealthy, processed subsistence born out of necessity.

And it was this recipe that was passed down from generation to generation.

We’ve established the fact that the recipe itself is very basic. All you need is:

In my cultural education of the frybread, I’d also seen the odd recipe with egg in it. I passed on that, as the majority didn’t have egg and two of my kids have egg allergies.

There are variations to the recipes that I saw, but the differences were fairly minimal, apart from the milk or water issue. Most recipes I saw used water, so that’s what I went with too.

I found that the more water you use, the softer the bread. And also, the thicker the rolled out dough, the more chewy the bread.

In these photos, the 4th time I made them, I rolled the bread out with a rolling pin, and fairly thinly. You can see that they are bordering on the crispy, especially at the edges. I definitely prefer the more traditional, thicker frybread rolled out by hand, giving a more rustic result.

This ain’t no Diet Food!

Bien au contraire, mes amis! The fact that the Native American frybread is one calorie-ladened plate of heaven, is yet another reason why it provokes much debate.

Remember me saying somewhere above that I got Sean Sherman’s The Sioux Chef’s Indigenous Kitchen? Imagine my surprise when I started reading it only to find that he doesn’t feature this much loved Indian bread in his book, nor in his restaurant. This is one of the reasons why, says Sherman:

frybread contributes to high levels of diabetes and obesity that affect nearly one-half of the Native population…(the frybread) weighs in at 700 calories and contains 25 grams of fat. When you pile on the processed cheese and potted meats of an Indian taco, you’ve got a recipe for chronic illness and pain.

And that’s probably why some chefs have come up with the no fry version of frybread. I came across a recipe by Red Mesa Cuisine that cooks the bread in a skillet or on an open flame, not unlike the chapati and a host of other flatbreads around the world.

However, despite the bad calorie press it gets and its unhappy beginnings, the frybread is a much loved Native American tradition. Today, no Native American gathering or the regular pow wow is complete without the presence of the frybread served on little paper plates.

How to Serve Indian Frybread

And that brings me to the end of today’s post. I hope it was as good for you as it was for me! 😉

How about we get our aprons on?

If you fancy a hand at more flatbread recipes from around the world, here are some ideas:

♥ If you like the recipe and article, don’t forget to leave me a comment and that all important, 5-star rating! 😉 Thank you! ♥ 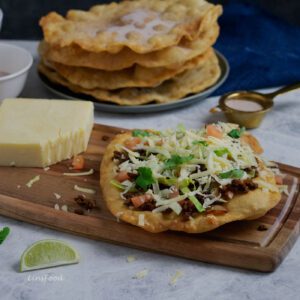 Indian Taco Topping (as you fancy)

Rolling out the frybread

The times and nutritional values are only for the frybread.