Skip to content
Want to make your own soya milk? Click here to get our super easy homemade soya milk recipe with just 2 ingredients!
Jump to Recipe Jump to Video Print Recipe 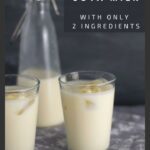 This is soya milk (or soy milk) the way it should be. Honest, clean and just the way I remember drinking it as a kid in Singapore.

Here in the UK, soya milk (as we call it) is so very easily available at all our supermarkets, and in various forms too. Fresh, long life, flavoured and sweetened or unsweetened. I guess we are rather spoilt for choice.

Over the last decade or so, it has become increasingly popular as a vegan or plant based drink and alternative to cow’s milk. Along with other non dairy milk, soya milk is also seen as a good option for people who suffer from lactose intolerance.

While we are not a dairy free household, my kids and I do consume a lot of soya milk, namely with our cereal and in our smoothies. It’s just a drink I grew up with, being as commonplace in East and South East Asia as other mainstream soft drinks.

I know soy has many detractors, mainly because of GMO concerns. But on top of that, there is also the issue of soy products containing a high level of phytates or phytic acid, which interferes with the absorption of nutrients.

But this is not a health food blog, so we’ll just move on to the recipe, shall we? So if you love your soya milk, and fancy making your own, read on!

So I’ve been making my own soya milk on and off since my oldest was born, over 21 years ago. This homemade version is the only soymilk I’ve drunk that tastes just like the one I used to drink as a kid.

It is such an easy recipe, needing only 2 ingredients. A third, if you want to sweeten it. You will need a blender though, as we will be blending the beans with water.

This is what we’ll be doing:

We start off by soaking the soybeans overnight in a large bowl with plenty of water. This water soak is crucial for softening the beans to allow for easier blending.

The next day, we drain and rinse the beans. Then we blend them a little at a time with water.

How much water you use will determine how thick or thin your soya milk is. It’s always best to start low, because you can always add more water to lighten it later, when you are simmering the milk.

Each batch that we blend is strained straight into a large pot. The straining can be done with a cheesecloth or a nut milk bag. My preference is for the latter as it’s easier to handle and squeeze a larger amount. Here is my affiliate link to get a nut milk bag on Amazon.

Finally, we heat the strained soya milk on medium and bring it to a boil. We then skim any foam that appears, and simmer it for 20 minutes. This is also the time to add any sweeteners if you so wish. That could be honey, sugar, stevia, whatever you like.

If you want a thinner milk, you can also lighten it at this stage.

And finally, we pour the pasteurised soya milk into sterilised bottles, cool to room temperature, before storing them in the fridge.

You could, if you wanted to, flavour your homemade soya milk. Personally, I love it as it is, sans any form of sweetener.

But when sweetened with sugar, it reminds me of a Chinese breakfast treat we used to have when I was little. It was called tahu panas, and was essentially, freshly steamed super silken tofu served with simple sugar syrup.

Where to buy Soya Beans?

You ought to be able to find them in health food shops. If you don’t have one nearby, get it online. Always look for, and buy, non-gmo soybeans, and preferebly organic.

I get mine on Amazon, as it has the widest choice. Here is my soybean affiliate link for the brand I buy. If you’re not in the UK, you’ll be given a similar option in your country.

How to Use Soya Milk?

Use it as a replacement to your regular milk, whatever that may be. So you could drink it, have cereal with it, make milkshakes and smoothies with it and also use it in hot drinks.

My handyman is vegan and his coffee is always made with our homemade soya milk, and boy, does he go through them!

Here are a couple of smoothies you can use soya milk in:

Turmeric and Matcha Green Tea Smoothie
A quick and easy green tea and turmeric smoothie that full of antioxidants.
Check out this recipe

How long will it Keep?

Our homemade soya milk will keep in the fridge for 5 days. I always make only about 2 litres worth at any one time, as I prefer to have it handy in the fridge, without having to defrost it.

But it also freezes well. Freeze in containers, giving a little space for expansion and use withing 3 months for the freshest aroma and flavour.

If you enjoy the recipe, drop me a comment and let me know. And if you are feeling like a star, don’t forget that 5-star rating!😉 The Night Before – Soak the Beans