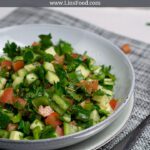 Turkish Shepherd Salad or Çoban Salatası in Turkish, is a popular side salad that is best enjoyed in the summer time.

Previously published in 2013. Republished with updated content in Feb 2022.

What is Turkish Shepherd Salad?

Turkish Shepherd Salad is a very popular salad all over Turkey, especially in the summertime. Let’s take a look at its Turkish name:

Its Turkish name is a bit of a puzzle, no one seems to know why it’s called shepherd’s salad. But in his book, The Turkish Cookbook, Musa Dagdeviren, a well known Turkish chef, has this to say:

Shepherds probably took a few tomatoes and an onion in their sacks to eat for lunch. They smashed the onion, halved the tomatoes and ate them together for a rudimentary lunch.

Restaurants got hold of the idea, and it soon gathered more ingredients and turned into this easy but much loved Turkish salad.

Turkey has many, many traditional salads, just bursting with various flavours, Çoban Salatası is king when it comes to simplicity. It’s such an easy salad to put together and wants only simple ingredients. Let’s go take a quick look at what we’ll need.

A good Turkish shepherd salad is made up of cucumbers and tomatoes at its base. Use whatever cucumbers you fancy, whether that’s Persian cucumbers, English cucumbers or Japanese cucumbers.

Each has its own characteristic and will work perfectly in this salad.

You’ll want to chop your cucumbers to bitesize pieces, roughly about 1 cm square (just under 1/2 inch). Don’t chop them up too small as you don’t want to end up with a mushy salad.

Get the best quality tomatoes you can get, of whatever variety. They want to be fairly rip but still firm, as you are going to be chopping those tomatoes up. Over ripe tomatoes are just going to fall apart.

The tomatoes want to be chopped up to the same size as the cucumbers, so one can enjoy a forkful of both ingredients at the same time.

Spring onions (scallions) are my preferred choice when making this Shepherd salad, for their mild and sweet taste and aroma. Sometimes I also switch it up by using red onions. Both are milder than brown onions, but if you prefer the latter, by all means do as you please.

The onions will also want to be diced up to roughly the same size as our cucumbers, tomatoes and chillies (below).

Whichever onion you’re using, you’ll want to chop it up to about the same size as the cucumbers and tomatoes.

The herbs used in Turkish shepherd salad is mainly parsley. A little bit of mint is added for a little lift in aroma. We will be chopping up our herbs finely, so that they’ll blend in with all the other ingredients.

Sweet green peppers known as banana peppers are not an uncommon addition to Çoban Salatası. I absolutely must have them. These are long, green and sweet (like bell peppers), and the Turkish varieties are called well, Turkish peppers!

They are sweeter than regular bell peppers and thinner than those long, pointy peppers (Romano peppers) you find sold in salad aisles. I buy them either from my local Korean shop or the Pakistani greengrocer.

If you can’t get them, regular bell peppers or the long pointy ones will do, as long as they’re green.

In some places in Turkey, cottage cheese is sometimes crumbled over Çoban Salatası, so if you want cheese with this salad, that’s the way to go. Stay away from the feta!

Feta cheese is lovely (if a little common) with salads, but it has no place in your Turkish Shepherd Salad. neither do olives. Keep those for when you’re making a Greek salad, a cousin of our Turkish one.

The dressing for Çoban Salatası is pretty basic, just extra virgin olive oil, some lemon juice, salt and pepper. I add a little sumac to it for an extra hit of lemony spice. I’ve eaten it in Turkey served that way, and I thought, why not?

This makes it a little similar to Salad Shirazi, another Turkish shepherd salad cousin, but this time from the area of Shiraz in Iran.

I’ve also had this shepherd salad in a couple of upmarket restaurants in Turkey, where there was a distinct flavour of red wine vinegar. So you could try that if you like, I mean if it’s okay in Turkey, it’s got to be okay in your kitchen, no?

How to Serve Turkish Shepherd Salad

It is traditionally served as a side salad, with whatever main meal you may be having. In my opinion, it’s such a versatile salad that it doesn’t matter what cuisine, this Turkish salad will fit right in.

Be sure to have some bread on the side though, to scoop up all that yummy juice sitting below the salad. Any flatbread like pita bread will work, but I just love baguettes with this.

You can make Çoban Salatası hours ahead, but hold the dressing. Chop up the salad ingredients place them in an airtight container and store in the fridge until you’re ready to serve. Or add them to a bowl and cover with cling film, then store in the fridge.

Then when you’re ready to serve, drizzle the salad dressing all over and toss gently to mix everything up. Don’t forget to taste it and adjust the seasoning as you like. So if you want more salt, more pepper, lemon juice or olive oil, by all means add more.

And that’s it. Shall we get our aprons on?

If you enjoy the recipe, drop me a comment and let me know. And if you are feeling like a star, don’t forget that 5-star rating!

Salad Shirazi | Persian Cucumber, Tomato and Red Onion Salad
Salad Shirazi is a simple Persian salad of cucumber, tomato and red onions that will shake your tastebuds alive with every tingling mouthful.
Check out this recipe