MENUMENU
Pandan, a type of screwpine is an essential ingredient in South East Asian and South Asian cooking. With its sweet, fragrant, grassy aroma, it is widely used in both savoury and sweet dishes.
Jump to Usage Instructions Print Instructions 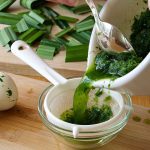 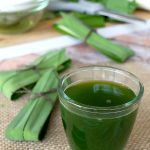 Pandan, a type of screwpine, is an essential ingredient in Asian cooking. With its sweet, fragrant, grassy aroma, it is widely used in both savoury and sweet dishes.

Pandanus amaryllifolius is the culinary pandan that we know. It is a tropical plant that grows freely in many parts of Asia. I remember it sprouting up everywhere, bottom of trees, in the middle of an untended field; corner of a garden; almost anywhere!

If it wasn’t a much loved herb, it’d be a weed!

The funny thing about the pandan leaf is that you have to heat it to extract its flavour and aroma. When fresh, you can hardly discern any fragrance, but once heated, aroma molecules seem to burst out of nowhere.

There are over 750 species in the genus called pandanus, according to Wiki. They are palm like in appearance, with long, thin leaves, but are only distant relatives of the palm.

Besides the amaryllifolius, the Pandanus odorifer (kewra) and Pandanus julianettii (karuka nut) are the other edible members of this Pandanaceae family.

What is the English name of Pandan?

For those of you who grew up with it, and haven’t been influenced by any hype, can you?

Let me know in the comments below.

I have always called it daun pandan, as it is known in Malay. In Singapore and Malaysia, even the non Malay speakers call it daun pandan; I guess some local foods just have a universal name for all the ethnic groups.

How to Use Pandan Leaves

Pandan leaves are used in both sweet and savoury dishes, as mentioned above. We use it for the aroma as well as the beautiful green colour. Here are some of the ways to use pandan leaves:

Use pandan juice to flavour and colour desserts and drinks

See the card below for precise instructions, but essentially, we chop up some pandan leaves, lighten with water, then squeeze the juice out. We used to pound the leaves with a pestle and mortar when we were little. Or grind it using a stone roller, called batu giling in Malay.

Pandan Juice can be used in:

⇒ guess I’d better get some pandan recipes going to show you exactly how to use it!

Use pandan to flavour rice

This is a very common practice. Pandan leaves added to rice gives it a lovely, sweet aroma. Think pilaus and biryanis and many Malay and Indonesian rice use pandan leaves like:

Use pandan to wrap food

The most famous of this is the Thai chicken wrapped in pandan leaves.  In the same way, you can wrap any small piece of meat and then barbecue it or even fry it. Not only will the leaf impart a beautiful fragrance to your food, but it will also stop it from drying out.

Use pandan in curries

Many Malay, Indonesian, Thai and even South Asian curries love pandan leaves! Ayam Masak Merah, a curry I featured in my Singapore Cookbook years ago, is a classic example of such a curry. I guess I’d better share it here soon.

Think of your favourite curry, chances are, it’ll love the pandan!

Where to buy pandan leaves?

This one is easy, at least it certainly is in the UK. Most Chinese grocers or mini marts will sell them frozen, which retain all of the aroma you want. If you live in a town with a sizeable Asian population, chances are, you will get them fresh.

Otherwise, what do I always say? Get them online! Just do a Google search, and you’ll find half a dozen entries.

I used to grow pandan leaves, which did very well, kept on a sunny windowsill. When we went travelling for a few months in 2015, I gave away all my plants, and the pandan is the only tropical evergreen that I’ve not replaced. The friend who took it managed to kill it within weeks, otherwise, I could have easily split the plant and grown it again.

Is the pandan “exotic” to  you or is it a plant you are familiar with? Let me know with a comment below. And while you’re at it, don’t forget the all important 5-star rating for the post and instructions on how to use it!
Lin xx 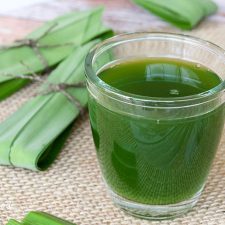 What is Pandan and How Do You Use It?

How to get pandan juice

Nutrition info is from Wiki. Potassium per 2 leaves: 93mg