Skip to content
Pilpelchuma (filfel chuma) recipe, a red chilli paste from the Libyan Jews of Tripoli. Spicy, garlicky and tangy, it can be used a condiment and ingredient.
Jump to Recipe Jump to Video Print Recipe 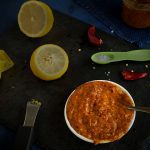 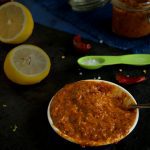 This is a very easy recipe, and doesn’t need any cooking apart from the couple of minutes of dry roasting the 2 whole spices, cumin and caraway seeds.

This Libyan Jewish chilli paste was introduced to the world at large when Jerusalem was published, the book by Ottolenghi and Sami Tamimi. And I’ve had so many questions about it ever since, so here I am, finally delivering on my promise to chat about the recipe.

The word pilpelchuma translates to pepper-garlic in Hebrew, and that basically sums up this most delicious chilli paste. It bears a strong similarity to so many chilli paste recipes we have here on LinsFood, like Chipotle Paste, Harissa and the multi purpose Red Chilli Paste. :

Jews in Libya? Absolutely, once upon a time.

Libyan Jews can trace their history back to around 300 BCE, when the Sahara Desert, which now covers 90% of Libya, was a lush, green expanse. Theirs was a thriving, cosmopolitan community, especially under Italian rule in modern Libya.

Sadly though, not a single Jew is to be found in the Libya of today. I’m going to explore a little Libyan Jewish history in a related post soon, when we’ll be cooking a traditional fish recipe from this cuisine. It’s this reader requested post, Chraime (Aharaimi) that prompted today’s spicy little number, as I always use it in that recipe.

Filfel Chuma, in its most basic form, is made with dried red chillies (or chilli powder/paprika), garlic and lemon juice. It’s garlicky, spicy and tangy, as we ascertained right off the bat.

Cumin and caraway add some earthy depth and a hint of smokiness to this Libyan Chilli sauce. And there are a few more ingredients that you can add, if you like, but more of that later.

I learnt this recipe from an old colleague, Moise A. He would always bring food from home for lunch, and it was, without fail, always delicious smelling. I was, after all, a big fan of Jewish food by then, having worked in a very Jewish area for a year and a half in the 90s.

Pipelchuma is a Garlic Lover’s Paradise!

I remember one particular lunchtime, I’d gone to the gym, and got back to the office with about 5 minutes to spare, with something shop bought. I walked into a room filled with the most tantalising garlicky aroma, much to the consternation of some of our colleagues, who insisted on opening all the windows in the middle of January!

Now, being a lover of all things garlic, I just had to know what it was, and, more importantly, how to make it! Not only did I learn the recipe that day, but I learnt all about the Libyan Jews.

I love history, in whatever form. If you’ve been following me a while, you’ll know that, as evidenced by some of my (too?) detailed articles like the following:

So weeks after my discovery of filfel chuma (as Moise called it), I read up as much as I could on the history of Libyan Jews. But more of that in my next post.

How long will Pilpelchuma Keep?

It will keep in the fridge, covered with a layer of oil, for 2 weeks.

You can also freeze it for up to 2 months.

How hot should Pilpelchuma be?

Traditionally, this is a spicy paste. How spicy you make yours is completely up to you, and can be determined by the type and amount of chillies you use.

I’m using sichuan chillies, which are medium-hot to me, and have a lovely fruity, citrusy flavour.

Dried jalapeños, called chipotle, will be perfectly mild, if you don’t do spicy.

Aleppo pepper is a mild, dried chilli that is very popular in the Middle East. It’s named after the city in Syria, and the flakes are a deep red, almost burgundy colour, with a fruity, raisin-y flavour.

If you can’t get aleppo pepper flakes, non smoky, mild paprika or a mild chilli powder will work just as well. Or hot, that’s completely up to you.

To my American readers: when I say chilli powder, I’m talking about pure chilli pepper powder, not a mix of chilli pepper and other stuff.

I’m using half a tablespoon of caraway and cumin seeds each, as I don’t want their presence to be too strong. Once you’ve made this recipe, feel free to experiment with a little more of both or either.

Now that we’ve got all that out of the way, shall we get our aprons on? Preparing the Cumin and Caraway seeds