Skip to content
Delicious fish tagine recipe. With added potatoes and vegetables, this fish tagine is full of sharp and piquant flavours. Perfect with bread or couscous!
Jump to Recipe Print Recipe

This Fish Tagine with Potatoes is one of my all time favourites, with its sharp and piquant flavours. The potatoes add a creamy touch as well as lending bulk to the dish.

All the ingredients in this fish tagine are pretty easy to come by, any firm white fish will do perfectly, although my favourite is monkfish. You can also use cod, haddock or mahi mahi, just to name a few common ones in my part of the world.

Besides the fish, we also have potatoes, tomatoes, peppers and olives. The potatoes are sliced thinly and help to give the sauce some character.

In the summer, when beautiful, fleshy and fruity tomatoes abound, I love using a combination of coloured cherry type tomatoes, for a pretty effect. You can go with cherry or regular tomatoes, it really doesn’t matter.

One final ingredient that is optional in this fish tagine, is pickled chilli (pepper). I love it, and because I grow chillies every summer, I always have some pickled ones in storage. They are, however, very easy to come by at delis or the Mexican aisle of supermarkets.

I find these chillies add a fantastically hot and sour dimension, which I simply adore. You can leave them out, if you like. If you do use them, make sure you get the whole ones, not the cut ones, which will just overpower everything else.

In today’s fish tagine recipe, we start off with making some chermoula, that delicious North African marinade, to first flavour the fish with. You can click on the link above to read more about chermoula and also for a couple of recipes.

We will be making yet another slightly different one here, see image, below. Variety being the spice of life and all that!

And to change it up a little, we shall do away with an actual tagine today, and cook the recipe in a deep, wide frying pan or a wide, shallow casserole dish. Anything that measures about 22 cm (9″) and has a depth of about 6cm (2.5″), give or take. With a lid.

How to serve this Fish Tagine with?

To many non North Africans, couscous is probably the go-to carb for tagine recipes. While couscous is perfect with just about any tagine recipe, as is white rice (brown just doesn’t soak up the subtle flavours), one of the best ways to enjoy tagine dishes is with bread. Whatever bread you have at hand will work: white or brown.

In North Africa, when you order a tagine recipe, of whatever inclination, you’re always given Khobz (khubz), the ubiquitous round bread found from Morocco to the other end of the Arabian peninsula. Because let’s face it, tagine recipes don’t come with a whole lot of gravy, you are supposed to scoop up the contents of the tagine and mop up the sauce with the bread in your hand. That’s the best way to enjoy a tagine.

Except for this lamb tagine recipe, which was specifically made with my gravy-loving family in mind!

There you go, folks, another tagine recipe in your repertoire. Shall we get cooking? 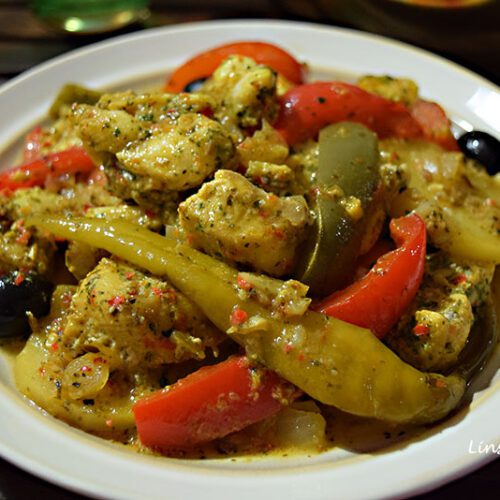 Total time does not include 1 hour of marinating time.

19 thoughts on “Fish Tagine with Potatoes”