Skip to content
Green Shakshuka with Tomatillos recipe. A delightful Mexican play on a Middle Eastern favourite, with a touch of Zhug, that Yemeni hot sauce.
Jump to Recipe Print Recipe

Green Shakshuka! Raising your eyebrows, perhaps? If you are a regular on LinsFood, you’ll know that every summer, if I’m around (and not travelling with the family), I try and grow tomatillos, those tart, green Mexican tomatoes. However, this is the first year, that I’m taking the time to make “real” recipes with them and blog about those recipes. You can read more about them here.

So far, we’ve had the Mexican Salsa Verde (of course!) and we’ve had the Tomatillo and Jalapeño Margarita. This Green Shakshuka with Tomatillos was just waiting to happen, after all, shakshuka is predominantly tomatoes, and tomatillos are tomatoes, right? Ok, kind of. Same family, anyway!

The Green Shakshuka is a delightful combination of tangy, herby and earthy flavours with a touch of heat.

The challenge in making this recipe was how much of the original recipe to change; do I stick pretty much to the original and just switch ingredients colour for colour?

My concern was that I wasn’t going to get enough depth in the sauce as when I make the regular red Shakshuka. I always use sundried tomato paste, which is like a secret weapon for me, for so many tomato based sauces.

In the end, I decided to close my eyes (in case it went a horrible brown!), take a deep breath and add some sweet smoked paprika. The paprika definitely lends additional flavour and that all important intensity. The colour did go a khaki green with the small amount of paprika, but that would have happened anyway once the vegetables were cooked in our green shakshuka. So I breathed easy on that end.

The other worry was the sauce, or possible lack of. Tomatillos are not as juicy as regular tomatoes, and I really didn’t want to start adding other vegetables to get a sauce, as I wanted to stick to the tomato, capsicum (peppers) and herb combination.

So I compensated for the lack of liquid by chopping up a little of the ingredients; a couple of tomatillos and a small amount of the parsley and coriander (cilantro) went into the chopper with a small amount of water, which would be cooked off.

Then I remembered the Zhug recipe I have on this site, that Yemeni green chilli paste/sauce. It added a beautiful depth and a little heat that just made the green shakshuka perfect!

Zhug takes about 8 minutes to make with easy to get ingredients, and will last a couple of weeks in the fridge. So why don’t you get 2 recipes done while you’re at it? If you don’t fancy making Zoug, just add a jalapeño to the ingredients to be chopped.

Don’t have Tomatillos for our Green Shakshuka?

Just get your hands on some green tomatoes. Here in the northern hemisphere, with it being autumn, there are probably quite a few of those going, especially if you grow your own, like I do.

What to Serve with this Tomatillo Shakshuka?

Shakshuka is a recipe that is very commonly eaten as breakfast and brunch throughout the Middle East. So bread, of whatever description, is the perfect accompaniment to this Green Shakshuka. Whether it’s flatbread or not. Even a flavoured bread like onion bread or olive bread would go extremely well.

If you do make some Zhug, have a bowl of it on the side, as I like to, for added heat, if anyone wants it.

What I also like to do is sprinkle some cheese on the shakshuka sometimes. What cheese? Anything your heart desires. The all too common feta, cheddar and mozzarella, or go crazy with some blue cheese.

Recipes that use tomatillos on LinsFood: 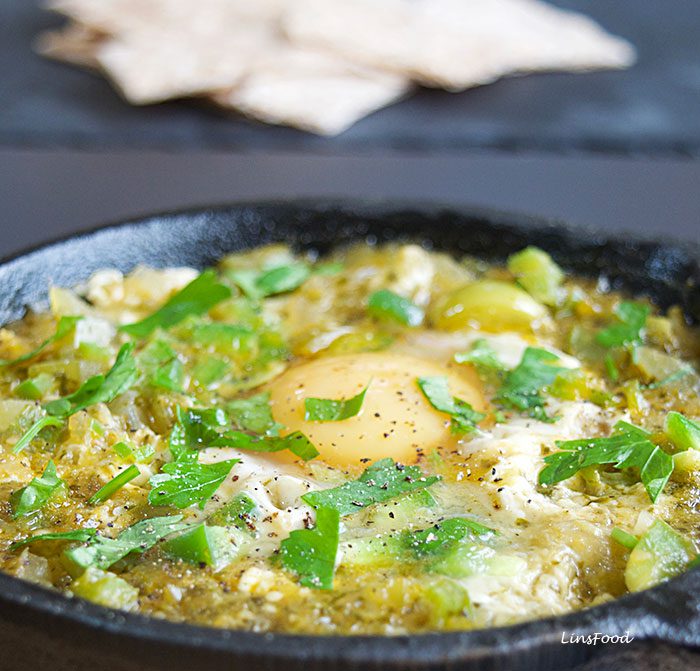