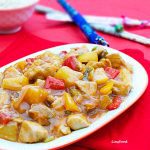 Sweet and Sour Chicken is one of the most popular takeaway dishes in the UK, regularly making the top 3 in polls conducted by the media. If truth be told, I haven’t met a takeaway sweet and sour chicken that I could eat! It’s always cloyingly sweet and a frighteningly bright red in colour!

But it’s one of my late husband’s favourites, along with lemon and orange chicken. So, one day, I decided to educate my husband’s palate with the real thing, the way I grew up eating it at countless Chinese stalls, and also, the way my mum used to make it. Mum used to love using fish fingers for it too!

You’ll see that the sweet and sour chicken is very similar to the American Chinese General Tso’s Chicken (image below) in its flavouring: it’s tangy and it’s sweet. What’s different is the complete lack of heat.

Here in the UK, as a takeaway dish, sweet and sour chicken comes in 3 forms:

If you like your chicken battered, just head on over to the General Tso’s recipe, and follow the recipe for the battered chicken, and use the sauce and the rest of the recipe here.

So our homemade sweet and sour chicken recipe today, is simplicity itself, and so much better than anything shop bought. These are the steps to the recipe:

This sweet and sour recipe is very tangy (sour – as you would expect), with just the right amount of sweet, that’s provided by the small amount of sugar we use, the tomato ketchup, as well as the juice from the canned pineapple we use. After you’ve made it the first time, you can play around with it, make it sweeter if you like.

Sweet and sour chicken often contains pineapple pieces, adding to the whole fruity nature of the dish. You can use fresh pineapple if you like, but I rather prefer using canned pineapple for this. The flavour and sweetness is just perfect, and of course, it’s convenient!

Edit: because of a question from a reader – omit the pineapple, if you are not a fan. The resulting dish won’t be as fruity, and also less sweet. Sweet and Sour chicken without pineapple, is not an uncommon dish. If omitting the pineapple, increase the sugar to 2 tsp, instead of the one here.

This is from the region of Shaoxing and made with fermented rice, and is a light brown to dark brown colour. You can use any rice wine (not vinegar) as substitute, or, failing that, dry sherry is a perfect substitute.

Vinegars made from fermented rice are very popular all over East Asia, and come in all sorts of colours, from clear to brown, to red or black, as in the Chinese Black Vinegar. Use a clear rice vinegar in this recipe, for a lighter taste. If you can’t find rice vinegar, any clear vinegar will do.

Because of the cornflour (cornstarch), a very popular ingredient in Chinese cooking, the sauce takes on a thick, silky feel and look. How thick you like your sauce to be, is a matter of taste and preference.

I usually make the sauce lighter, because my kids love lots of sauce on their rice. When the sauce is thick, it doesn’t go as far. Take a look at the pictures on this page.

And that, people, is about as complicated as this popular dish is! Perfect for Chinese New Year, which is just over 2 weeks away. Let’s get to work! Or is that play?

If you fancy more Chinese recipes, head on over to the Chinese page, as well as the Singapore and Malaysia page for favourites like: 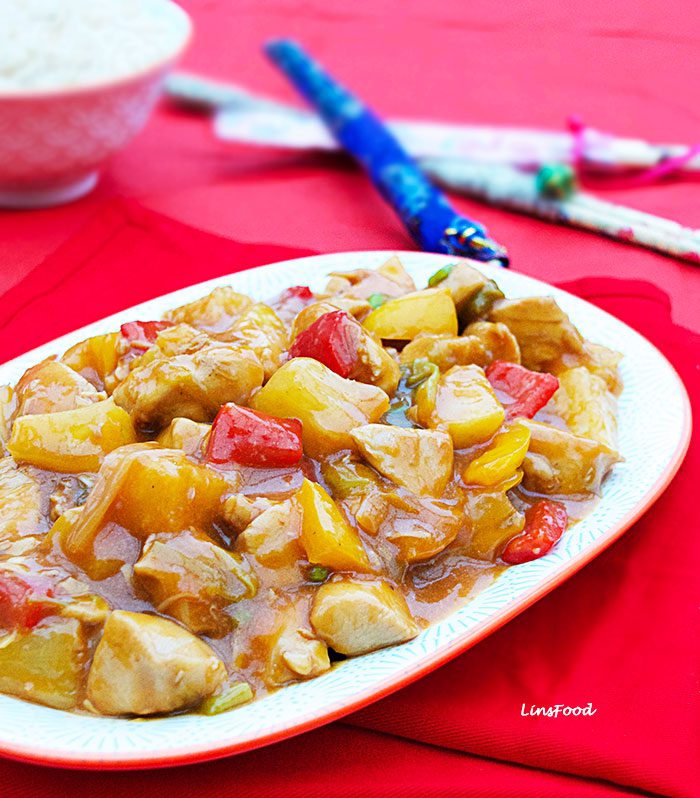 Cooking the sweet and sour chicken

Nutritionla information is based on 6 servings.