Skip to content
A quick tutorial on how to extract colour from ratan jot (alkanet root), a natural red dye that is traditionally used as a food colouring in Indian recipes such as Kashmiri Rogan Josh and Tandoori chicken.
Jump to Usage Instructions Print Instructions 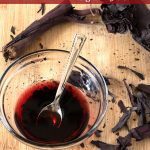 Ratan Jot, the root of Alkanna tinctoria, is a natural red dye that was traditionally used as a food colouring in Indian recipes such as Kashmiri Rogan Josh and Tandoori chicken.

Now if you are a fan of Indian and Pakistani food, you will be familiar with both these dishes and their signature red colour. Sadly, these days, artificial food colours have replaced ratan jot in tandoori chicken and the traditional Kashmiri rogan josh has been butchered with the use of tomatoes. All in the name of the colour red.

A plant with many names

Alkanna tinctoria is a perennial herbaceous plant belonging to the borage family. It has small, blue, trumpet like flowers.

Our alkanet is also known as Dyer’s bugloss, Spanish Bugloss and Languedoc Bugloss, the latter two, give you an idea of where it is also grown.

It is the root of the A tinctoria, or Ratan Jot, that gives us the prized deep red colour. Besides Indian cooking, it is also used by the cosmetics industry as well as the art and furniture industries.

As you can see in the images, the root is quite big, and has layers of brittle, almost paper-like coverings. All of it can be used.

How to use Ratan Jot

Interestingly, Ratan Jot is not soluble in water. However, luckily for us, it is soluble in oil, alcohol and ether. So for cooking purposes, all you need to do, is heat it up in a little oil, ghee or butter, then strain it with a metal strainer, before using. Discard the used ratan jot. Now you can add the red oil/fat to whatever dish you want to.

If I’m finishing a curry with it, I use it with other spices like fennel, cumin and aromatics. So in this instance, I tie it up in some muslin, then heat it up in a small frying pan, along with whatever else I’m using. Then all I do, is lose the muslin and pour all the red, aromatic oil over the curry, to finish.

You’ll see me doing this in the Kashmiri Rogan Josh recipe and video, coming soon.

Ratan Jot is reportedly full of medicinal qualities. It is antibacterial, antipruritic and an astringent, and has been used to treat a number of ailments going back hundreds of years.

It helps old ulcers, hot inflammations, burnings by common fire and St. Anthony’s fire … for these uses your best way is to make it into an ointment also if you make a vinegar of it … it helps the morphy and leprosy … it helps the yellow jaundice, spleen, and gravel in the kidneys. Dioscorides saith, it helps such as are bitten by venomous beasts, whether it be taken inwardly or applied to the wound, nay, he saith further, if any that hath newly eaten it do but spit into the mouth of a serpent, the serpent instantly dies … It also kills worms. Its decoction made in wine and drank, strengthens the back, and easeth the pains thereof. It helps bruises and falls, and is as gallant a remedy to drive out the smallpox and measles as any is; an ointment made of it is excellent for green wounds, pricks or thrusts.

In the modern world, ratan jot:

Where to buy Ratan Jot?

Online! You should be able to find it at health food stores, but most likely, the online ones.

Besides that, you know that Amazon sells Alkanet Root

Alright then, ready to stretch your culinary muscles with my latest offering? Get it in your pantry and we’ll cook up some authentic Kashmiri Rogan Josh very, very soon!

♥ If you found the article useful, don’t forget to leave me a comment and that all important, 5-star rating! 😉 Thank you! ♥

And if you buy ratan jot or use it, share an image on any platform and tag me @azlinbloor, and hashtag it #linsfood 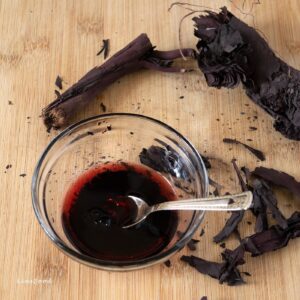 How to use Ratan Jot

You don’t have to throw your muslin away. Just get rid of the ratan jot, wash your muslin in hot water with a little washing up liquid. Then rinse and dry, ready to reuse.
Discover more Ingredients!Check out The Ingredients Page