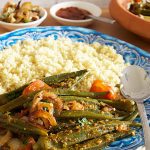 This Vegan Tagine of Okra, Tomatoes and Onions is a light, slightly tangy tagine full of herby flavours, topped with delicious caramelised onions. So easy to put together and once again, you can cook it in a regular saucepan or wok or make it in a tagine.

The first time I tasted this very basic vegan tagine recipe was in the town of Sid Bel Abbès in Algeria. Simple but extremely tasty with the topped caramelised onions and is reminiscent of tfaia tagines, which are tagines topped with said onions. Since then I’ve had it on a number of occasions, many times in Morocco and on half those occasions, the okra tagine was made with minced beef or lamb.

I must admit, making it with a little meat deepens the flavour of the whole tagine and is the way that my husband likes to eat this dish, because he hates tomatoes, isn’t a big fan of okra and is undecided when it comes to onions! So our Vegan Tagine today is a bit of a non starter really, for him.

Which is why when I make it at home, without any meat, it always accompanies another main dish, whether another meat tagine or as a side to bryanis and other North African or Middle Eastern recipes.

How to Serve our Vegan Tagine?

With fresh bread, just the way I like eating all tagines! Nothing allows you to soak up, literally, the delights a tagine has to offer, than bread! Needless to say, you can serve with any starch you like.

I don’t have much in terms of advice with today’s recipe, it’s pretty straightforward. I keep the okra whole, instead of slicing them for two reasons:

Once again, we’ll be making chermoula as the base of the “sauce” and flavour in our Vegan Tagine. It’s a very mild and light chermoula, if you compare it to the other ones we use in our Tagine Masterclass.

One of the identifying flavours of this okra, tomato and onion tagine is the final topping of fried, caramelised onions. Frying the onions in the tagine will take longer, as for starters, you’ll be waiting about 10 minutes for your tagine to heat up. So, sometimes, I get that done in a frying pan, while the tagine is cooking. And that’s the method we shall be employing today, for simplicity.

Of course, using the tagine to caramelise the onions will add just that little bit of extra flavour to the other half of the onions that will form the base. So, fry your onions in the tagine if you have the time and the inclination. But don’t fret too much about this point, as this vegan tagine is going to be eaten with the caramelised onion, remember?

Spice level of this Vegan Tagine: I’ve had all sorts, so it is up to you to spice up or down, and this can be achieved with the paprika as well as the green chilli you use. Either use a hot paprika or a hotter type of green chilli, like a scotch bonnet or Thai birds eye. Or both.

Buying Okra – look for the bright green, firm ones. These are the younger, fresher okra and will have less tendency to split when cooking whole. Stay well away from the khaki green coloured ones and most certainly, leave those with obvious black, brown or grey streaks.

Not a fan of okra? Use green beans or broad beans. Green beans will need a shorter cooking time, maybe about 10 minutes less.

That’s it. Let’s get our aprons on!

♥ And if you like the recipe, don’t forget to leave me a comment and that all important, 5-star rating! 😉 Thank you! ♥

If you make it, post it on any social medium and tag @azlinbloor

This Vegan Tagine of Okra, Tomatoes and Onions is so easy to put together; you can cook it in a regular saucepan or wok or make it in a tagine.