The B-52 is a super delicious, easy to make, layered shot drink, made with Kahlua, Baileys and Grand Marnier.
Jump to Recipe Print Recipe 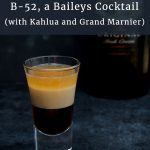 The B-52 is a super easy shot drink or shooter, in this case, a layered shooter. It is apparently named after the popular new wave 70s band, who sang that iconic 80s/90s song, Love Shack.

It’s such a delicious drink, almost like drinking caramel out of a glass, but potent caramel.

There are many variations to the B-52, with changes in the alcohol used, and each with a different number designation. But the original B-52 has:

All you do, is layer the 3 drinks in order as they appear above, see the recipe card below. Having said that, one of my readers, Tina, had this to say:

I used to be a cocktail waitress/bartender in the early 80’s and beyond – This is the REAL recipe given in this article. Except it wasn’t layered and it was chilled in a cocktail shaker then strained. SO much better that way. We used to add a float of Stoli on top. This is still my favorite drink 40 years later.

B-52 with Bomb Bay Doors

With a 4th layer of Bombay gin

With tequila instead of Bailey’s Irish cream

B-52 with a Full Payload

With Sambuca instead of Irish cream.

With Amaretto (an almond liqueur) instead of Grand Marnier.

With absinthe instead of Grand Marnier.

With peppermint schnapps instead of Baileys.

This is just like the original B-52 but three times larger.

Add a splash of rum 151 to the Grand Marnier and light it up. The rum will ensure that you get a flame. Serve with a metal straw, or blow out the flame before drinking.

♥ Do you like this recipe? Please give it a 5-star rating below! And when you make it, share it on Instagram or any other social medium and tag me @azlinbloor. Thank you! … Lin ♥ 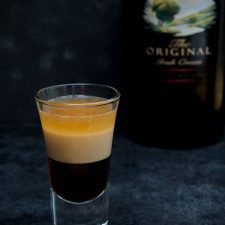 B-52, a Baileys Cocktail (with Kahlua and Grand Marnier)