Skip to content
A review of Cointreau, Cointreau Blood Orange and Cointreau Noir, a French orange liqueur, one of my favourite liqueurs for drinking, mixing and cooking.
Jump to Recipe Print Recipe

Cointreau, a French orange liqueur, is one of my favourite liqueurs for drinking, mixing and cooking. To me, no other Triple Sec spirits have quite the same class as Cointreau, in aroma, flavour and most certainly, in the bottle that holds the drink.

Cointreau is named after the family who created it; with the distillery being set up in in 1849 by 2 brothers, Edouard-Jean and Adolphe Cointreau, who were confectioners, by trade.

The orange liqueur that we know today, was created by Edouard-Jean’s son, Edouard Cointreau. The first bottles of Cointreau were sold around the early 1870s, but this original drink was deemed a little too sweet by its then biggest customers – the Brits. What followed was a drier version of the original, and it is this crisp liqueur that the world enjoys and loves today.

The original drink was called Triple Sec. However, with so many Triple Sec drinks flooding the market, in the early 20th century, the company got rid of the name Triple Sec and went with Cointreau.

What is Cointreau made of?

It is made with a combination of sweet peel (Citrus Sinensis) and bitter orange peel (Citrus Aurentium), pure alcohol (96%) water and sugar, resulting in an aromatic, sharp and slightly sweet spirit.

In Edouard’s own words, “I wanted to combine crystal-clear purity with the subtlety of tastes made from the perfect blend of sweet and bitter orange peels.”

The orange peel is what makes Cointreau so special because it has more than one source, including South America, West Africa, Spain and North Africa, with varieties like navel, pera and salustiana.

“Most are dried, but some sweet Spanish orange peels are macerated fresh in alcohol, giving candied, vanilla notes. “The bitter orange peels give the fresh aromas,” explains Langlais. “They’re zesty, green and very volatile. The sweet are the opposite – they give the juicy orange flavours. It’s a fresh and fruity combination.” Extracted from The Spirit Business

Aroma: a strong orange aroma, both zesty and from that of orange oil, with sweet overtones

Flavour: very, very clean and sharp, with a strong orange flavour and a touch of spice and even marmalade, in the background.

How do you drink Cointreau?

You can drink it neat or with ice, but as many mixologists will tell you, it is simply awesome in cocktails. Many, many well known cocktails have Cointreau as an ingredient. Even if you see the words Triple Sec listed as an ingredient, chances are, if the cocktail was made by someone with discerning taste, that someone meant Cointreau!

The image above shows you one of my favourite easy drinks when I don’t fancy a glass of wine. It started out with simple Cointreau and Orange, a drink I discovered in my 20s. Adding DOM Benedictine to it was one of the best discoveries I made!

The best Margaritas are made with Cointreau, and on LinsFood, we have a few of those on our Drinks Page. Some examples:

And, looking at the images on this page, you can see that there are now a total of 3 types of Cointreau. Besides the original, we have Cointreau Blood Orange and Cointreau Noir.

Made with the finest Corsican Blood Oranges, with 30% abv. I had been eyeing this for a long, long time, and finally, got it for Christmas last year, from my in-laws (they know me so well).

What are Blood Oranges?

I love blood oranges, given a choice, they would be the oranges I’d eat all the time. But, their season is comparatively short and they are very seasonal, unlike their regular cousins, which one can find all year round. Blood oranges have a stronger and sweeter aroma and flavour, and their colour is simply to die for. I love them in salads, by the way.

You can read more here.

However, I am not altogether certain that there is much to differentiate between this and the Cointreau classic. I reckon it does have the semblance of being sweeter, but what I can certainly discern, is the slightly stronger bitter aftertaste – altogether, just as classy, and just as smooth as the original. Maybe it has a little more of a bite, I’m not sure. I’ll go through another bottle and get back to you on that! 🙂

I use it in exactly the same way as I do the classic. PS: I was a little surprised with the first pour. Given the colour of the bottle and blood oranges, I was not expecting a crystal clear spirit!

I only came across this last month, and couldn’t wait to get my hands on it! Cointreau Noir is orange liqueur with French Cognac, and has an abv of 40%.

From the company’s site:

“This latest deeply alluring, premium-quality spirit (…) promises to astound and enchant spirits connoisseurs and cocktail lovers alike, with the freshness of the orange flavour mingling with the velvety smooth caress of cognac for an experience of ultimate indulgence.”

Oh man, they are right with the word “caress”. I am not a brandy drinker, but I didn’t let that stop me.

The first sip went straight up my nose and to the back of my throat! Cough.

The second sip, I went slow, and made sure it was a small one. The Noir is luxuriously potent and at the same time, caresses you with a lover’s touch. It warms you and it comforts, while it ignites a fire deep down.

And, it has become my favourite after dinner drink.

Cointreau Noir is also wonderful in cocktails, and I love using it with Bénédictine.

In my post on D.O.M. Bénédictine, I mention the combination of Benedictine and Brandy, B & B by Bénédictine, a proprietary blend since 1937, that Ernest Hemingway is supposed to have “created”. So, given that Cointreau Noir has brandy in it, and I like Cointreau and Orange, I thought it might go well with the Dom.

And boy, was I right! The mix is both smooth and powerful, glides effortlessly while still making you sit up and take notice. The ratio is up to you, 1:1 works or 1 DOM: 2 Noir might be better, given the Dom’s intimidating nature. Neat works, but as mentioned in the Dom post, drop a couple of ice cubes in, watch the oils swirl, and inhale the intricate bouquet. Erm, not too closely, maybe!

Cointreau Noir also makes a great substitute for Grand Marnier. It’s stronger in character, and a little more sophisticated. And is what I sometimes use instead in B-52 and my twist on a classic, Spice Between the Sheets. The only downside to this is that it’s more expensive than Grand Marnier.

If you fancy drink reviews, infusions and cocktail recipes, head on over to the Drinks Page, for goodies like:

If you enjoyed the article, don’t forget to leave me a comment and that all important, 5-star rating! Merci!

And if you buy it or use, share it on any platform and tag me @azlinbloor, and hashtag it #linsfood.

But in the meantime, here are some ways to enjoy Cointreau: 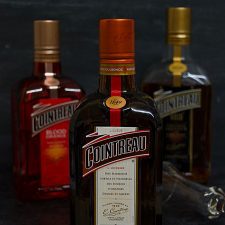 Nutritional values are for Cointreau and Orange.