MENUMENU
Chicken Chitarnee, an Indian Jewish Curry, is an onion and tomato based curry spiced up with a very few Indian spices and lots of lemon juice and vinegar.
Jump to Recipe Jump to Video Print Recipe 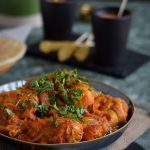 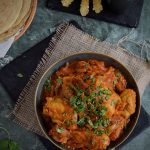 Chicken Chitarnee, an Indian Jewish Curry, is a favourite with my family. It is an onion and tomato based curry that is spiced up with the use of a very few Indian spices and lots of lemon juice and vinegar. The result is a beautifully tangy curry with definite hints of spices.

The curry comes from the Jewish community in India. Although a minority religion, Judaism was one of the earliest foreign religions to travel to India in recorded history. The following excerpt is from The Indian Express:

“Jews in India, unlike those across the globe, are divided into three distinct groups as per their geographical location and origin myths in the country — the Cochin Jews, the Bene Israeli and the Baghdadi Jews” (as in Baghdad, Iraq). “Each of these three categories arrived at different points in time and formed their Jewish identity as per the historical forces operant in India at that time.”

The earliest known Jewish arrival, in the 2nd Century BCE, according to legend, were the Bene Israel, via a shipwreck, whose history is now entwined with the myth of the 10 lost tribes of Israel. It is fascinating, if history interests you, whatever your religious inclination. Click on the Indian Express link above to read more, and there is a whole lot of literature on the net, sometimes conflicting, about the origin and progress of the Indian Jews.

Then there were the Sephardic Jews who settled in south India, namely Goa, Chennai (Madras) and along the Malabar Coast. Sephardic Jews are European Jews who fled the Spanish Inquisition in Spain and Portugal in the 15th and 16th centuries.

And since I learnt it in Singapore where I grew up, let me just mention that there is a significant minority Jewish population in Singapore. The first wave of Jews to Singapore was sometime in the 18th century, and were the Baghdadi Jews.

With that short background, let me get back to the Chicken Chitarnee recipe itself. I learnt to cook this recipe when I was about 17 years old, in a friend’s kitchen, with her mum.

Hana and her family were Indians and in the early days of knowing her, I just assumed that with a name like that, she was a Christian, like some of my other Indian friends. One or two faux pax later, I learnt all about the Indian Jewish community and their presence in Singapore.

This recipe was from Hana’s maternal grandmother, who was a Sephardic Jew. Hana’s dad, however, claimed that his mum used to cook the same recipe too, although with a little more spice, and his mum belonged to the Baghdadi Jews!

So whatever specific Jewish origin the Chicken Chitarnee has, I can’t tell you for certain, as there isn’t a whole lot of literature about it out there. Suffice it to say, it is most certainly of Indian Jewish origin.

Is Chicken Chitarnee Sephardic Jew or Baghdadi Jew in origin?

Having said that, let me make an educated guess or two. The massive use of tomatoes here reminds me of the Portuguese Frango com Molho de Tomate, Chicken in Tomato Sauce. And didn’t the Sephardic Jews settle in Goa, whose cooking is tangy with its liberal use of vinegar?

And along the way, as they discovered Indian spices, it was only natural that some of those spices would find their way into the chicken in tomato sauce, resulting in what we know today, as Chicken Chitarnee.

What do you think?

I reckon Chicken Chitarnee is a Sephardic Jewish recipe.

Hana and I were classmates, and going over to her place for lunch was not an uncommon affair, as her house was a mere 10 minutes away from school while mine was a whole hour. As I was already cooking by that age (growing up with one’s granny does that), learning how to cook this beautifully sour, spiced and sweet curry was always going to happen.

I’m glad I did, as it is something I still cook today, 30 years later, and as mentioned above, it’s a firm family favourite. Everybody goes yay, when I mention I’m cooking it!

How to Cook Chicken Chitarnee

There isn’t a whole lot of things to note for this recipe, it’s pretty straightforward and easy. It is a thick curry, with the chopped up onions and tomatoes making up the sauce. You can add a small amount of water to it, if you would like a little more sauce, no more than 125ml (1/2 cup) though.

As with all chicken curries and stews, meat on the bone is going to give you the best result, as the bones lend depth to the sauce. Use a whole chicken if you like, but I have always preferred a mix of portions, like thighs, drumsticks and breasts to make up the total weight for the meat.

Use vegetable oil, if you like, that’s how Hana’s mum made it, I’ve gone for olive oil here, for no particular reason. Don’t use coconut oil though, it will change the flavour.

You can use any meat you like in this, like beef or lamb, but adjust the cooking time. Your red meat will need 2-3 hours of cooking time, which means that you will have to add water to it as the meat is cooking, to prevent the curry from drying up. 250ml (1 cup) should do the trick, but use more if need be.

Just add curry friendly vegetables like potatoes, aubergines (eggplant), capsicums (bell pepper) and courgettes (zucchini) or any others, even beans and pulses. Adjust the cooking time as necessary. Potatoes will need more time, but not if they are chopped into small cubes.

Well, that’s it, folks, what are your plans for the weekend? Whatever it is, I wish you a good one! 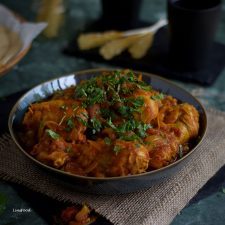