MENUMENU
This is the real deal Kashmiri Lamb Rogan Josh, no tomato in sight! Find out how you too can make it at home the way it's made in Kashmir.
Jump to Recipe Print Recipe 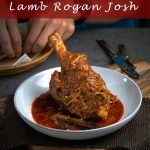 Kashmiri Lamb Rogan Josh is one of the most well known Indian curries in the world. It certainly is here, in the UK. Unfortunately though, the genuine article is not easy to find in British restaurants and impossible in our takeaways. But more of that later.

Before we move on, I suggest you grab a cup of java, and head on over to the Kashmiri Cuisine page to read up on Kashmiri food culture and Kashmiri history. It’ll give you a better grasp of the cuisine, enlighten your mind and whet your appetite.

What is Rogan Josh?

Rogan Josh is an aromatic, mildly spicy, with hints of sweet, slightly dark, reddish Indian curry from the region of Kashmir. It is traditionally made with mutton (not goat), and is one of the stars of grand Kashmiri feasts, called Wazwan.

An authentic Kashmiri Lamb Rogan Josh, is in itself a bit of a misnomer. This is because there are basically 2 types of Rogan Josh: the Kashmiri Muslim version and the Kashmiri Pandit (Brahmins) version.

There are a few marked differences between the two traditional recipes. I stress the word traditional, because over time, these variations have overlapped each other and have taken on the odd ingredient and style of cooking.

On top of that, each chef, or waza (as they are called), would also have his own little take on the traditional recipe. The following are just some of the general differences between the 2 styles of cooking, not just in today’s rogan josh, but in the other recipes shared by the two communities:

What does Rogan Josh mean?

The Kashmiri lamb rogan josh is definitely a Moghul legacy; after all, the name is in Farsi, the Persian language.

Take your pick, no one can quite agree on the actual literal translation of the recipe name itself. The bottom line is, it’s a curry, or an Indian stew, if you like, which is what curries are, when you think about it.

The wazwan is a multi course meal unlike anything you’ve ever come across! Dish after dish after dish, and mainly of meat, but served and flavoured differently.

The grandest of these will be the Royal Wazwan that is made up of 36 courses! Can you imagine that – not just the splendour, but actually eating all those dishes, most of which will be of mutton, including today’s rogan josh.

Suffice it to say, the actual wazwan, whether it only had 12 courses, or 24, or the Royal 36, would be a magnificent, opulent feast, a ceremony that has many parts to it.

However, in 2017, the Kashmiri government passed a law to cut down on the food wastage that is common in large wazwans. Since 2017, only 7 meat dishes and 7 vegetarian dishes are allowed at any celebrations.

You can read up more on this as well as get more information on Kashmiri cuisine and its history over at the Kashmiri Page.

So we’ve already ascertained that there isn’t 1 original recipe. However, one thing is for certain. Now repeat after me:

There are no tomatoes in Rogan Josh!

Only in crappy restaurants and takeaways.

Any self respecting Indian cook would never, should never, put tomatoes in his or her rogan josh.

Because of the mawal, ratan jot and kashmiri chillies, the true kashmiri rogan josh has a deep red colour. Many people outside of Kashmir achieve this colour with kashmiri chillies and tomatoes or tomato purée. Which changes the flavour, and really, can only be called a cheat’s rogan josh. Which it doesn’t have to be, whether you can get the red colouring or not. Let’s read on, shall we?

Let’s talk about the recipe here, the one that I’ve been using for a number of years. The foundation is the Kashmiri Muslim recipe I learnt in the 90s. However, as mentioned earlier, I use ratan jot, as it’s easier to get here in the UK.

On top of that, I absolutely loved Lalitha’s use of fennel seeds in her recipe (from her family chef), and have incorporated it into the final stage of the recipe. Lalitha gave classes in my cooking school (out of my kitchen). I’m assuming here that you’ve read the detailed article on Kashmiri Cuisine here.

Apparently, many Kashmiri Muslims do not sauté their aromatics, nor do they brown their meat first. However, Mrs Ghulam (my Kashmiri teacher) always did it, and so, I do too.

You can read more about the ladies I mention above on the Kashmiri Cuisine page.

Traditionally, it was mutton that was used in rogan josh, as mutton, and not goat, was the meat in the area. However, I’ve always used lamb, because I am not a fan of mutton, and as this is the UK, mutton is not a common meat at all.

So use lamb if you like, or mutton if you prefer.

And, look out for our Kukkur Rogan Josh, or Chicken Rogan Josh in a few weeks. I use saffron in that, for a change.

What cut of Meat?

Leg of lamb is always good for curries and stews, as is shoulder. If you buy your meat from a butcher, get him to chop it up into large cubic pieces, as meat always shrinks upon cooking. But make sure that you take the bone too. Always add bone to your stews, soups and curries, for a dish with better flavour and depth.

If you buy ready cubed meat, then drop in a lamb chop or two, if you like, the ones off a rack.

In these pictures, I am using lamb shanks. I love shanks, and because they are very impressive and elegant when served whole, I’ve left them so for the pictures.

This is also what I do when I’m cooking for more upmarket clientele, which made up the majority of my old catering work. Each diner gets a whole lamb shank with rice and naan.

However, when I’m cooking for my friends and meat eating family, I let the shanks fall apart, and pull the meat off the bone, before serving. So one shank will serve 2, even 3 people, depending on the size. Of the shanks and the people! Am I allowed to say that last bit in this day and age? 🤔

Can’t get Ratan Jot or Mawal?

If you want the real deal, whatever you do, do not substitute it with tomatoes.

Not that rogan josh with tomatoes is not yummy, mind you, just not the genuine article, which is what this recipe post is all about.

I think Rick Stein (a chef I enjoy watching) suggests going down the beetroot erm, route. While it certainly seems like a good idea as far as the colour goes, beetroot has a rather strong, earthy flavour, doesn’t it? Which your rogan josh will end up having, right? Beetroot rogan josh, anyone?

Let’s just ask ourselves a question. Why must we make our rogan josh red when neither ratan jot nor mawal actually contribute in terms of flavour?

So what do we do? Cook the curry as per the recipe here and leave the colour concerns at the kitchen door. It’s the taste that we want, isn’t it?

If you like your curries on the spicy side (who doesn’t?), then you can definitely increase the Kashmiri chilli powder, which will give you a redder curry. But not too much, as too much of any chilli powder will make your recipe bitter.

This varies from home to home, waza to waza, and of course, whether it’s the Pandit rogan josh or the Muslim version, even if that line isn’t the clearest anymore. These are the spices commonly used (though not all at once!):

Unlike the smaller, sweeter green cardamoms, black cardamoms are not shy. They have a commanding presence, with a smoky and woody aroma because they are dried on an open fire.

Amomum subulatum, the black cardamom is also known as the Nepal cardamom and Bengal cardamom. I’ll do a full article on it soon!

At just 1000 – 2000 Scoville units, these are super mild chillies, and are grown for the vibrancy they give to recipes. If you can’t find real Kashmiri chilli powder, get the mildest one you can find.

To my American readers: chilli powder outside of the US means just that – ground, dried chilli peppers, nothing else added. What you guys would call cayenne powder, I think.

What Fat to use in Rogan Josh?

Ghee is the fat of choice, especially for the Kashmiri Muslims, while mustard oil and/or vegetable oil is the Pandits’ traditional choice.

I must confess that I love ghee, and I love mustard oil. Over the years, I’ve used them interchangeably in Indian recipes and even in the Kashmiri Rogan Josh. I shall leave this one up to you.

I get my mustard oil from Amazon. In fact, I just ordered this one yesterday (affiliate link):

Ok then, I think I may have just exhausted the topic. And myself. If you have any questions, just leave me a comment below. And if you are a Kashmiri, and have something to add, I would very much love to hear it.

Look out for the video in the coming week. This is the real deal Kashmiri Lamb Rogan Josh, no tomato in sight! Find out how you too can make it at home the way it's made in Kashmir.
5 from 19 votes
Print Add to Collection Go to Collections
Course: Side Dish
Cuisine: Indian
Keyword: curry, kashmiri, lamb
Prep Time: 15 minutes
Cook Time: 1 hour 40 minutes
Servings: 4 (2-4)
Calories: 229kcal
Author: Azlin Bloor

The curry will freeze very well, for up to 3 months. It will also keep in the fridge for 2 days.