An easy process to extract colour from the Cockscomb flower. Known as Mawal in Kashmir, it is one of the ingredients used to impart the colour red to Rogan Josh and other dishes in the Muslim community.
Jump to Usage Instructions Print Instructions 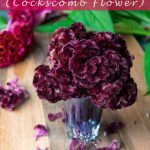 There are many types of cockscomb flowers, with the generic name of Celosia. However, this post is about a specific type of cockscomb, known as mawal in Kashmir, Celosia Cristata (also C. Argentia).

This particular celosia is called cockscomb. The reason becomes clear when you look at it; the flower head resembles the cock’s comb, the red crest on the head of certain birds like roosters and turkeys.

The cockscomb is grown in many shades but is especially popular in red and purple.

There be divers sorts of Floure-gentle, differing in many points very notably, as in greatnesse and smalnesse; some purple, and
iDamaske Nigella others of a skarlet colour;

Can you eat Celosia?

Yes! Celosia is a member of the amaranth family, and comes in many guises. The plants are traditionally grown and picked as food in many parts of the world. The leaves and flowers (especially the leaves) are consumed in East and West Africa, in India, in China as well as South East Asia.

As mentioned above, mawal is the Kashmiri name for one type of cockscomb, the Celosia Cristata. It is also known as brain flower, not surprisingly, when you look at the pictures.

You might recall that I have another ingredient that I talked about recently, Ratan Jot, which is the root of the alkanet plant. Ratan jot is commonly used by the Kashmiri Pandits (Brahmins) in their rogan josh.

When I cook rogan josh, it usually leans towards the Muslim version, with onion and garlic in the mix. However, I tend to use ratan jot for the colour, instead of mawal, for the simple reason that it is easier to get here in the UK.

I haven’t had any luck with buying dried cockscomb flowers here, as they are sold in Kashmir. One can only find (or grow) the fresh ones, which means that they are only available in the summer.

How to extract colour from Mawal?

To extract colour from the cockscomb flower, all you do is simmer it in a little water for the briefest time. The longer you leave it, the more brown the colour becomes.

How to Oven Dry Cockscomb Flowers

Now if you do have access to fresh cockscomb flowers and want to dry them for use off season, you’re in luck!

There are many ways to dry flowers for home use, whether for decorative purposes, for art or for the kitchen. Just do a simple Google search and you’ll find lots of articles on it.

The method I’m using here is something I learnt as a teen in Singapore. It must have been in Home Economics class, and you can use the same method for other flowers too.

So there you have it, another post, another natural food colouring used in the Kashmiri Cuisine. Let’s go take a look at how to extract the colour from mawal.

You’ll find a huge range of ingredients from around the world on the Ingredients Page. Kashmiri recipes will be coming in over the next few months, and will be found on the Kashmiri Page, a brand new project.

♥ If you found the article useful, don’t forget to leave me a comment and that all important, 5-star rating! 😉 Thank you! ♥

And if you buy/find mawal or use it, share an image on any platform and tag me @azlinbloor, and hashtag it #linsfood How to Extract Colour from Mawal, a traditional Ingredient in Kashmiri Muslim Rogan Josh

An easy process to extract colour from the Cockscomb flower. Known as Mawal in Kashmir, it is one of the ingredients used to impart the colour red to Rogan Josh and other dishes in the Muslim community.
5 from 11 votes
Print Pin Add to Collection Go to Collections
Course: Ingredients
Cuisine: Indian, Kashmiri
Keyword: mawal
Prep Time: 10 minutes
Steeping Time: 5 minutes
Author: Azlin Bloor