Christmas pudding is a traditional British dessert served at the end of the Christmas meal. It is a rather heavy, spicy and sweet pudding made up of dried fruits and alcohol.

It is often served with custard, brandy butter, cream or ice cream. However, there are definitely 2 camps when it comes to this beloved of dishes; not quite as divisive as marmite, but almost! My husband, for example, rather dislikes it.

Traditionally, Christmas puddings are made on, or immediately after, the Sunday before Advent, known as Stir Up Sunday; the term comes from the opening prayer in the Book of Common Prayer of 1549.

Stir Up Sunday is a very British Christmas tradition, sadly, dying, every member of the family will take a turn at stirring the ingredients and making a wish, cementing the name Stir Up Sunday.

I am constantly urging people to make their own puddings, and have been running Christmas pudding classes for well over a decade now. Kids and adults alike are always amazed at just how easy it is. There are many households around here that serve my particular recipe, with the odd personalisation!

It’s an easy but totally indulgent recipe that hits all the right notes – sweet, spicy, fruity with a hint of crunch! The house smells wonderful as your pudding cooks away and for us, THAT heralds the start of our Christmas preparations! This is the Christmas pudding that’s graced our table for almost 2 decades! (2016 Update: that’s over 2 decades now!).

It started life as Delia Smith’s recipe but even from the word Go, I did away with the guinness that she calls for, opting instead for sweet sherry, a favourite drink. And brandy was also the obvious other alcohol. All other changes were made over the years, for a pudding that suited my taste. But thank you Delia, always so reliable when it comes to traditional British recipes.

Christmas pudding or Plum pudding as it is also known, goes back to medieval England although it was only in Victorian times did it take on the form we’re familiar with, that is, made in basins and steamed for hours sans meat. Prince Albert, husband to Queen Victoria, is said to have introduced the Christmas pudding as a sweet attraction at Christmas.

The traditional Christmas pudding used to be made with 13 ingredients to represent Jesus and the 12 Apostles, and the ingredients are also stirred from East to West to remember the 3 Wise Men.

In the past, cooks will quite often include a small charm in the pudding, usually a silver coin, that the finder will keep, the coin signifying wealth in the New Year. Other charms used were a small wishbone (for good luck), a silver thimble ( for thrift) and a small anchor (for a safe journey).

The Christmas pudding, like mincemeat, is best made a few weeks before, to let the flavours mature.

Remember to start the day before you intend to steam the pudding. Another thing to remember on the day of steaming is that if you’re making a big pudding, that is one pint or more, you need 8 hours of cooking time, so start early! This recipe ought to give you enough to fill a 1 litre (pint and a half) pudding basin. That’s big, it ought to feed 8 people!

What I do these days is use a 1 pint (about 575 ml) basin and then have enough to to make 3 mini puddings (mine have a capacity of 150 ml, to the brim), perfect to give away OR if you’re like me, one before and one after Xmas with one to spare, maybe at Easter?! Of course the mini puddings make fantastic homemade presents. Our Christmas pudding cookery classes are extremely popular, with kids and adults alike!

The picture below shows you mini puddings in plastic basins. These make life so easy, no fiddling with foil and baking paper. Just put the lid on and steam. Then when they’re done, wash and dry the lids and place them back on the puddings when completely cold.

Suet is the saturated fat that’s found around kidneys and other organs in animals, it’s solid at room temperature. Traditionally, Christmas puddings were made using beef suet, which is shredded for use. I switched to vegetarian many years ago and much prefer its cleaner after taste.

Suet is used in steamed puddings because it has a higher melting point than butter and the pudding has a chance to set before the  fat starts to melt, unlike butter. Vegetarian suet is usually made with palm oil and is also solid at room temp, also grated for use.

Substitute: no real substitute but you could get away with using solid vegetable shortening/fat. Grate the amount you need and substitute with suet in your recipe.

Although butter isn’t recommended as a substitute for suet, I have successfully used it. The pudding was absolutely delicious, although a touch greasier than its suet counterpart. Because of that, I use 80 g (2 3/4 oz) of butter. Freeze the butter, then grate just before adding to the recipe.

A last word before we get cooking the Christmas Pudding:

Making your own Christmas Pudding is a lot of fun, and very, very satisfying. Get the whole family involved in measuring out the ingredients, then more importantly, get them all to stir the ingredients in a clockwise motion, to represent the Three Wise Men’s journey from East to West. And get them to make a silent wish as they do it. This has long been a favourite ritual in our house. 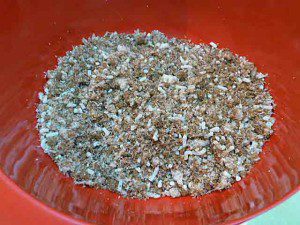 all the dry ingredients 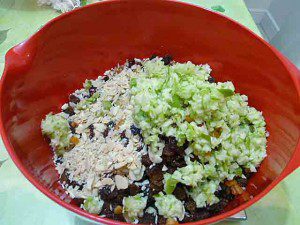 the dry with the apple 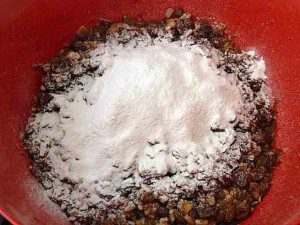 plus flour the next day 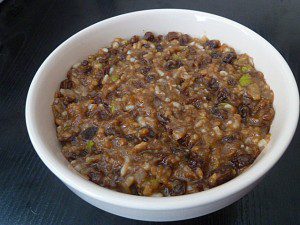 not quite to the top, pre steam 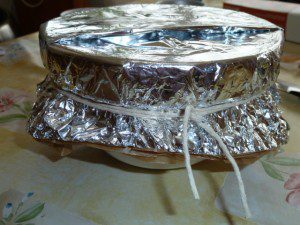 all tied up, ready to be steamed 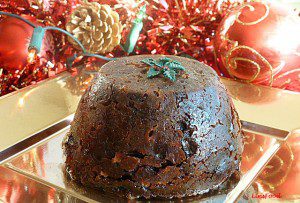 Christmas pudding is a traditional British dessert served at the end of the Christmas meal. It is a rather heavy, spicy and sweet pudding made up of dried fruits and quite often made with alcohol.

Total time does not include the overnight resting.