MENUMENU
Gushtaba is a dish of Kashmiri meatballs cooked in a creamy, tangy, almost soupy, yoghurt gravy; the grand, last dish served at a Wazwan.
Jump to Recipe Print Recipe 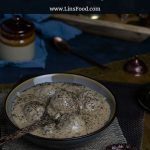 Gushtaba is a dish of Kashmiri meatballs cooked in a creamy, tangy, almost soupy, yoghurt gravy. It takes pride of place in the legendary Kashmiri Wazwan, and is traditionally served as the last dish of the banquet.

What is Kashmiri Wazwan?

The Kashmiri Wazwan is a multi course banquet that is synonymous with weddings and large celebrations in Kashmir.

The most famous of these banquets is called the Royal Wazwan, and this would have consisted of a total of 36 dishes, with rice and condiments, served alongside them! Can you imagine that?

However, in 2017, to cut down on the waste that inevitably accompanied such grand festivities, the Kashmiri government decreed that Wazwans could only have a total of 7 meat dishes and 7 vegetarian dishes.

You can read more about the Kashmiri Wazwan, as well as Kashmiri culture and history on the Kahsmiri Cuisine page here on LinsFood.

As mentioned above, gushtaba is simply meatballs cooked in a lightly spiced yoghurt gravy. Once you have the meatballs ready, it is a pretty easy recipe. But more of that later.

The gravy itself is traditionally pretty light, almost like soup, and there’s lots and lots of it, to accompany the rice that it’s served with as the last course in the Wazwan. This light, soupy gravy is called yakhni in south Asian cooking.

My gushtaba recipe is less “soupy”, I reduce the huge amount of stock that’s typically called for, as well as the amount of yoghurt in the recipe.

Apart from that, gushtaba is very easy to cook, requiring mostly commonplace ingredients.

I discussed Kashmiri meatballs at length over at the Rista recipe post. If you’ve seen that post (and I know some of you have made it), you’ll remember that I ask you to make 3 differently sized meatballs for our various Kashmiri meatball recipes.

Looking at the image above, you can see that the balls for gushtaba are the biggest followed by the Rista ones, and finally, the palak rista. I’ve even given them weights to make it easier for anyone cooking the recipe.

These are the approximate weights in the order you see in the image above: 80g, 40g, 20g. So essentially, make the balls in roughly these weights for the various recipes.

Now, you can make the Kashmiri meatballs yourself, or you can use shop bought meatballs, I’m not going to judge!

Kashmiri meatballs have a different feel and texture. This is because, traditionally, the meat is pounded for ages with added fat, before being formed into balls.

The extended pounding breaks down the connective tissue, resulting in denser but still bouncy meatballs.

What we’ll do is essentially mimic this pounding by processing fatty lamb meat in a food processor. We still break down the muscle fibres and connective tissue, end up with pretty much the same result.

On the Rista recipe post, you’ll find instructions on how to do it the traditional way, using a mallet. Here, we’ll employ the food processor.

But like I said, make it with store bought meatballs if you prefer, the dish will still be delicious.

Difference between Gushtaba and Rista

As we discussed above, Gushtaba meatballs are large, while Rista meatballs resemble more what we expect of meatballs, in terms of size.

I promise you, it’s very doable. These are the steps:

As mentioned above, the ingredients are mostly commonplace. But let’s take a look at the ones that may need a little attention.

Black cardamom have a commanding presence. The have a smoky and woody aroma from being dried on an open fire.

Amomum subulatum, the black cardamom is also known as the Nepal cardamom and Bengal cardamom.

I get mine online at the moment because for the last year, movement has been rather restricted because of Covid-19. These are the ones I use.

In many of the Kashmiri recipes I shall be making, we employ a quick, homemade stock for the recipes. This is just a case of dropping some bones into water, sometimes adding aromatics, and simmering for a mere 30 minutes.

You can do so, or you can start with a shop bought one, but it needs to be diluted to half strength.

Traditionally, you’d be using thick, hung yoghurt or what south Asians call curd. This, if you want to make it at home is just a case of straining regular yoghurt over muslin overnight, in the fridge.

The resulting yoghurt will be thick, ensuring maximum flavour.

My Kashmiri teacher’s recipe went a step further. Mrs Ghulam would always cook her yoghurt down to half its original amount. She said that this was how she was taught to make it, and didn’t feel the need to change.

If you want to do this, all you have to do is start with 2 cups of yoghurt, cook it down for about 30 minutes to half the amount. The trick is to stir regularly and to cook over a low flame, otherwise your yoghurt will split. Then use it in the recipe below.

If truth be told, yoghurt often splits when cooked, no matter how diligent you are and what the books, chefs and bloggers tell you. So don’t worry about it. Your curries will still taste fab, like your gushtaba today.

This is homemade. We fry some onions, using the low and slow method, then we grind it into a paste.

I did a whole post on fried onion paste here, and suggest that you make a nice batch of it and freeze it in ice cube trays. I used 2 ice cube size of it for today’s recipe.

Firstly, a sort of a disclaimer. Over the years, having served Gushtaba to countless friends and customers, I’ve come to the conclusion that it’s not a favourite with the Western palate.

I don’t know what it is, maybe it’s the preconceived curry notion that we have. Or perhaps it’s the yoghurt gravy that isn’t particularly spiced or coloured the way popular curries are.

Let me know what you think if you make this.

Gushtaba is served with plain white rice at the end of the Wazwan. And that’s how I tend to serve it too, with a few accompaniments.

When it’s for friends or customers, there is always another curry to go with it, something that fits the common perception and taste, as well as some sort of chutney and a vegetable dish.

Head on over to the South Asian page for ideas.

Ok then, shall we get our aprons on?

The Rest of the Ingredients

Lamb Stock (get this going while you get everything else ready)