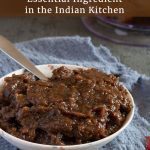 This fried onion paste is an aromatic, delicious paste of slow cooked onions that are blended down to a paste with no other added ingredients.

Sometime last month, I started a new series here on LinsFood, focusing on Kashmiri cuisine. I have a pretty solid foundation in that, going back to the mid 90s in London. You can read more about this, as well as soak up some history and culture on the Kashmiri cuisine page.

So far, we’ve only done one recipe, Kashmiri Lamb Rogan Josh, and 2 articles on essential ingredients in the Kashmiri kitchen: Ratan Jot and Mawal (cockscomb flower). These are used to add the colour red to recipes. Then of course, there was the massive undertaking, the Kashmiri Cuisine page itself, which took me a few weeks, as I lost myself in the history of the region!

So I’m planning to work on the next Kashmiri recipe this weekend and realised that it would make sense to do a recipe post on the fried onion paste itself.

I’ve received many messages from you guys who are really excited about this Kashmiri cooking series, so here’s another one to get done and add to the freezer. Then we have a supply of fried onion paste whenever we need it, cutting down on each recipe’s cooking time. Makes sense, right?

As mentioned above, it’s an essential ingredient in the Indian kitchen. It is used a lot as a base in many curries, and imparts a deep, aromatic, almost caramelised undertones to whatever you use it in.

There is also boiled onion paste, but to me, that is nowhere near as delicious, so I don’t bother making that.

There are a few slightly different ways of making fried onion paste, but essentially, the idea is the same – we fry sliced onions, then we grind them to a paste. That’s it.

The differences I mentioned earlier are in how you fry them, and also in how you grind them. Let’s take a look.

What to do with the Cooking Oil?

The cooking oil from this fried onion paste recipe is one of the best extras ever – it adds so much to any dish you use it in!

When you’re done frying the onions, cool, cover and store the oil for up to a week. I prefer to keep it in the fridge, to ensure freshness. It gets rancid after a while. This fragrant oil can be used in so many different ways:

How to store the Fried Onion Paste?

I keep a little in a small jar and use it within 3 days. As I always make this in bulk, I tend to have lots extra. I freeze it in the same way that I do chilli pastes on this site.

Basically, we fill up an ice cube tray (or two), cover, and freeze for up to 3 months. Then, you can use as much or as little as you need, according to your recipe.

For a standard recipe serving 4-6, we only tend to use about 1 tablespoon of the fried onion paste (give or take), so an ice cube size is perfect.

Alright then, let’s get this done in the next few days, then you’re all set to move on to more Kashmiri recipes!