Skip to content
Mulligatawny Soup recipe, hot and sour, it dates back to the days of the British Raj, and is the perfect cold weather soup; light, yet remarkably hearty.
Jump to Recipe Print Recipe

Mulligatawny Soup dates back to the days of the British Raj, when, apparently, the South Indian (Tamil) cooks came up with Pepper Water to satisfy the Brits’ desire for soup with their meals. It was a light, watery soup, flavoured lightly and with pepper.

This pepper water became “Rasam”, a light, but spicy, peppery, tangy soup eaten with rice or roti. And over time, that basic rasam gave rise to the mulligatawny, as returning Brits replicated what they’d been served in India.

But first, let’s look at the name:

Mulligatawny Soup is a typical Anglo Indian dish, much like kedgeree. It always brings back memories of my grandmother at her kitchen stove in Singapore, frying whole dried red chillies (cough, cough, sputter, sputter!) for this recipe, or when she made Rasam, a south Indian soup.

However, the Mulligatawny of today hardly bears any resemblance to the original, as over the years, it has embraced many, many other ingredients like curry spices, vegetables and meat, even cream, yoghurt and coconut milk. The modern product is a semi-hearty soup that is perfect for our cold and wet months here in the UK.

Our mulligatawny soup recipe here stays pretty close to its predecessor, Rasam, in taste; light, hot and tangy, but with more body, like a stew as opposed to a broth.

I’ve included the three defining ingredients of Rasam as I remember them from my granny’s kitchen: black pepper, tamarind and fresh curry leaves. You can do without the curry leaves and use fresh coriander leaves (cilantro) instead.

I know it looks like a long list of ingredients, but you only need to prepare the aromatics, tamarind and vegetables. The rest are all spices. Once you get everything ready, the cooking process is very easy.

Tamarind is a tropical fruit that grows as a pod on the tamarind tree. The pod or fruit is shaped like a bean and contains a pulp with lots of seeds.

This pulp is usually mashed with water to create “juice” that is extensively used in many cuisines around the world for its souring properties; it is also used for medicinal properties and believe or not, as a polishing agent!

If you can’t get tamarind, the best substitute is the humble, clear vinegar.

How to Make this Mulligatawny Soup Your Own

This soup is very versatile in its “filling”, in that you can make it vegetarian, or use chicken, or any other meat.

The amount of chilli and pepper here will result in a fairly hot mulligatawny soup but not too hot that you’re not able to talk! Perhaps halve the black pepper and chilli powder and check the seasoning at the end. The type of chilli powder and green chillies you use will also determine the end heat, so go easy if you’re not sure!

I put the onion, garlic, ginger and fresh chilli in a chopper and mince them all up together, just like my granny used to. In fact, this is a method I learned from her that I still employ widely for many recipes.

Here, I’m using ground coriander, cumin and turmeric but, for simplicity, 1 tablespoon of curry powder or a general shop bought curry paste will work too, but not too much as curry is not the overriding flavour.

How to serve The Mulligatawny

How do you eat it? Any which way you like! I love to have it with rice, it’s how I grew up eating it, just like a curry. You can have it with bread, roti or even mash, my husband’s favourite.

Just make sure to use good quality, shop bought stock. These days, that shouldn’t be hard to do at all. You can even find fresh stock in the fridge aisles of supermarkets, next to the raw meat.

We tend to have frozen homemade stock at home, but there are always some stockpots handy for when we run out, and because they are also very convenient. These are the ones I use.

One stockpot or stock cube is usually for 500ml (2 cups) of water. So for 1 litre (4 cups), you need 4 cubes or stockpots. However, since our mulligatawny soup calls for half strength stock, you will only need 2 stockpots or stock cubes for the whole litre asked for in this recipe.

For this recipe here, besides the celery, carrots and capsicum, add 1 courgette, 1 leek and 1 eggplant. Chop them up to a similar size.

That’s all there is to it.

If you enjoy the recipe, drop me a comment and let me know. And if you are feeling like a star, don’t forget that 5-star rating! 😘

Head on over to the Soups and Stews page for more ideas from around the world, like the following:

Eshkeneh, Persian Onion Soup with Egg and Fenugreek
Eshkeneh recipe, popularly known as Persian Onion Soup, is made with eggs and fenugreek. You can make Vegan Eshkeneh very easily, by leaving out the eggs and using only olive oil.
Check out this recipe 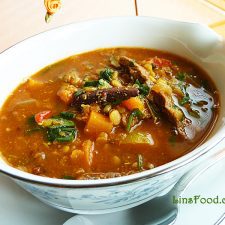 The rest of the Ingredients

Let's prep the vegetables and aromatics

21 thoughts on “Mulligatawny Soup, a very Anglo Indian Dish of the British Raj”