Skip to content
Mutabal is a delicious Middle Eastern dip that's perfect as a side dish, a condiment or on the Mezze table.
Jump to Recipe Print Recipe 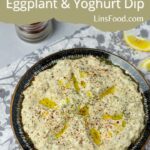 Mutabal is a rustic dip made with smoky aubergines, yoghurt and tahini. It bears a strong resemblance to the more well known baba ghanoush and the Greek melitzanosalata.

Also spelt muttabal and moutabal, it is a dish that can be eaten as a dip or a side and makes a fantastic addition to the mezze table. Mutabal is a glorious combination of smoky, garlicky, nutty, creamy and tangy flavours – what’s not to love?!

This Middle Eastern eggplant dip is made with easy-to-find ingredients, and half the recipe can be prepared ahead. So it’s just perfect for entertaining.

What’s the difference between mutabal and baba ghanoush? They are both eggplant based, and both also contain tahini.

The big difference between mutabal and baba ghanoush is the use of yoghurt in the former, giving it a creamier and tangier flavour.

On top of that, mutabal also traditionally, did not contain any spices like cumin, coriander and paprika. These are all fairly modern additions. The infographic below gives an idea of the similarities between the two, as well as the main differences.

The ingredients in bold are what differs. As mentioned earlier, the main difference between mutabal and baba ghanoush is the use of yoghurt in muttabal.

It’s very easy to make at home. If you’ve never made any smoky eggplant recipe before, then you might hesitate at how we prep them before making mutabal.

Essentially, the first step to any smoky aubergine recipe is the charring of the aubergine. The method that gives the smokiest result is outdoors, on charcoal. But this is not possible for everyone, or you might not fancy lighting up the barbecue just to char the eggplants.

So the next best thing is to start it off on the gas hob, and then finish them in the oven.

I’ve given you both methods in the recipe card below.

No gas hob? Straight in the oven then.

If you have a gas barbecue though, you might as well just do it on the stove. Because gas is gas, unless you have wood chips, etc.

Incidentally, the charred aubergines freeze well. So I always make extra, especially if I’ve got the barbecue going. Then if I fancy any smoky aubergine recipe, I’ve already done the “tricky” bit. I usually make about a dozen a time, as they are great in pasta sauces and curries too.

So to make muttabal at home, this is what we’ll be doing:

What do you think? Doable?

As mentioned earlier, muttabal uses the most basic of ingredients. There is an optional garnish of herbs, and if you like, sumac, the latter upping the tangy quotient of this Middle Eastern tahini dip.

Sumac may be the only ingredient you might have trouble with, depending on where you are. Here in the UK, it is available at out large supermarkets and Ocado, the folks I shop with, stocks them too.

Let’s take a look at some of the ingredients.

The bulk of muttabal is made up of eggplants, or aubergines, as I tend to call them more often than not. It really, really doesn’t matter what aubergines you use: Chinese, Indian, Sicilian, globe, green or white, they will all give you a delicious mutabal.

In fact, last year, I grew a couple of heirloom eggplants, and used them both in making muttabal as well as baba ghanoush. One of them was the white variety called Casper – it was awesome!

So it doesn’t matter what eggplants you use, which is why I’ve given you a rough weight for them in the recipe card below. But in case you’re wondering, the traditional eggplants for this are of the large, purple variety.

Yoghurt is what differentiates mutabal from baba ghanoush and melitzanosalata. It adds a creamy and tangy flavour to this aubergine dip that makes you want to go back for more, again and again.

Full fat yoghurt is the best and the thicker the yoghurt, the thicker your muttabal. I’ve even used crème fraîche in this with a delicious end result, albeit a little tangier.

Can you use low fat yoghurt to make mutabal? Absolutely. And if truth be told, one would be hard pressed to tell the difference.

Our final main ingredient when making mutabal is tahini, which as you probably know, is just toasted sesame seeds ground up and mixed with EV olive oil.

I have never bought tahini, always preferring to make this easiest of ingredients at home, when I need it. Since I always have sesame seeds at home (and olive oil, naturally), that’s easily done.

No shop bought tahini is going to match your 10-minute homemade tahini dip. So spare 10 minutes to make it, your muttabal will thank you for it.

Homemade tahini is a grittier affair with a fresh toasty aroma, and a much better texture.

I have a tahini recipe here on LinsFood, but I’ll give you the recipe for it in the card below anyway.

Mutabal has a noticeable garlic presence. I’m taking the middle road and going for 2 medium cloves, which will allow you to smell and taste the garlic but it’s not overpowering. Don’t forget, raw garlic is always going to be stronger. You can increase the number, or decrease it, as you see fit.

Any salt will do, as long as it’s additive free. Fine salt or freshly milled is best, as you want it to dissolve well in our cold yoghurt.

The lemon juice wants to be fresh, naturally, right? Always use fresh lemon and lime juice when cooking, for the best flavour.

When our mutabal is all done, and dished up, we can top it with any number of things. The traditional one is a drizzle of EV olive oil, adding a grassy and peppery slant.

You can also sprinkle some sumac over, some paprika (smoked, sweet or hot) and the obligatory fresh herbs. Chopped parsley is my favourite, mint also works well. But go easy on the garnish as we want the muttabal to shine through.

A favourite food bling of mine is pomegranate seeds, especially for photoshoots. But I have to confess, I don’t like eating them! So I’ve skipped them here, partly also because everyone else seems to be using them on their mutabal! But feel free to top your finished eggplant dip with some pomegranate seeds if you like them.

We’ve touched on the fact that you can serve it as a dip, a side dish or as part of the mezze table, right? As far as the first two are concerned, treat it like you would the Indian raita or the many Persian borani dishes like this borani laboo, beetroot and yoghurt dip.

So if you are serving it as a dip, think the usual suspects: vegetable sticks, flatbreads, tortilla chips, breadsticks and whatever else comes to mind.

As a side dish, mutabal goes well with barbecued and grilled stuff, with roasts and most definitely with Middle Eastern rice and stews. It would make an excellent side for Maqluba, the upside down Palestinian rice dish. Here are some examples:

Chicken Mandi Recipe (Yemeni Smoky Chicken and Rice Dish)
Yemeni Chicken Mandi recipe, a smoky roast chicken and rice dish that is originally from Yemen, but now found all over the Middle East.
Check out this recipe

And there you have it, let’s get our aprons on!

If you enjoy the recipe, drop me a comment and let me know. And if you are feeling like a star, don’t forget that 5-star rating! Shukran!

Borani Laboo
Borani Laboo is a dreamy, creamy Persian recipe of beetroot in yoghurt. It can be eaten as a dip or a condiment in a meal, much like raita.
Check out this recipe

Fried Gefilte Fish
Fried Gefilte Fish seem to be a singularly British Jewish food, made with minced fish, onions and spices and fried for a lovely crisp on the outside, soft on the inside bite.
Check out this recipe

Matbucha
Matbucha or Salade Cuite, is a cooked salad of tomatoes and capsicums (peppers) that originally came from the Moroccan Jewish community.
Check out this recipe 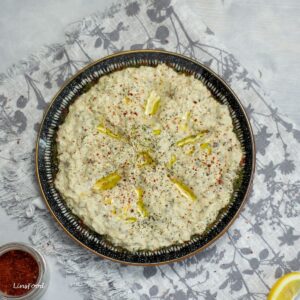