Skip to content
Tabbouleh recipe, an easy salad from the Levantine, made with a whole lot of parsley and just a tiny amount of bulgur wheat, as it should be.
Jump to Recipe Print Recipe 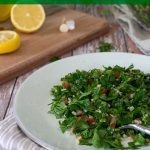 Tabbouleh is an amazingly green Levantine salad, found all over the Middle East and parts of North Africa. It is green in colour and green in goodness!

The Levant is the large, historic area east of the Mediterranean sea that includes Lebanon, Syria, Palestine, Israel, Egypt, Jordan and parts in southern Turkey.

The word tabbouleh comes from the Arabic word, tabil, which means to spice up. Incidentally, tabil is also a spice mix common in north Africa.

Tabbouleh is to be found all over the Levant and is a very popular summer offering, whether served as a side salad or as part of a mezze.

It’s an extremely easy salad to put together, sure there’s a whole lot of chopping going on but really, for the amount here, I don’t take more than 10 minutes to put it all together, if that. Not taking into account the soaking of the bulgur wheat, which takes 15 minutes, during which time, you’ll be chopping!

Summertime is the perfect time to make Tabbouleh, when you not only have an abundance of parsley, but are spoilt for choice in the seemingly endless array of tomatoes!

Unfortunately, a good Tabbouleh isn’t as easy to get as you might think. More often than not, when I’m served Tabbouleh, it has a strong bulgur wheat presence, totally obscuring anything else and most definitely the parsley.

A good estimate is the bulgur wheat should be about half the weight of the parsley, not amount. So if we’re going to do this, let’s start right, repeat after me:

Parsley is the star of the show!

Not the bulgur wheat.

How to Make Perfect Tabbouleh

Traditionally, this is flat leaf parsley, which has a lighter, but sharper aroma than the curly type. However, if all you can get is curly parsley, it will still give you, a delicious, perfect tabbouleh!

Just remember to chop it all up finely, which is easier done with the curlier variety, methinks.

I think this is where many people differ. Bulgur Wheat is made from ground wheat that’s been partially cooked, then dried. This, like couscous, makes it a super quick food.

It adds a lovely texture and a nutty flavour to tabbouleh, but still should only play a small part in the whole salad. To me, it should never compete with the parsley; its presence is only there as a slight distraction.

Having said that, I can tell you that almost every tabbouleh I’ve eaten in Israel has been a little heavy on the bulgur wheat. The Israeli tabbouleh tends to give this starch almost as much respect as the parsley.

But I’m not a fan. I think the whole idea behind tabbouleh is the fact that it is a parsley salad. All other ingredients are only meant to be playing a supporting part. And that’s how we are making our tabbouleh today, you won’t be missing that parsley, I’m tellin’ ya!

Salad Shirazi
Salad Shirazi is a simple Persian salad of cucumber, tomato and red onions that will shake your tastebuds alive with every tingling mouthful.
Check out this recipe

If you enjoy the recipe, drop me a comment and let me know. And if you are feeling like a star, don’t forget that 5-star rating! Shukran! 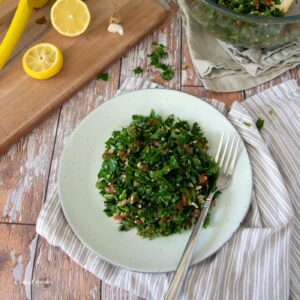 Let's chop everything up (while the bulgur wheat is soaking)

11 thoughts on “Tabbouleh Recipe (it’s all about the PARSLEY!)”