MENUMENU
A quick and easy homemade Za'atar recipe with suggestions on how to use it on flatbreads, with yoghurt and so much more.
Jump to Recipe Jump to Video Print Recipe 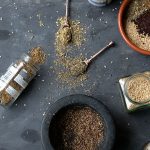 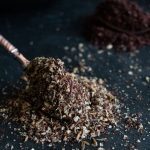 Za’atar is a gloriously fragrant spice mix from the Middle East, specifically, Lebanon. It’s earthy, herbal and tangy, all at the same time. Find out how to make this yourself, and you’ll be thankful you did!

While Za’atar is also the generic name for certain herbs like wild thyme (Za’atar is thyme in Arabic), oregano and bible hyssop, the term itself is more commonly used to refer to a particular Middle Eastern spice mix.

Now I use the word “particular” loosely here, as every cook, every family, is going to have their own “version”, lighter on this, heavier on that, just like mine is generous with the Sumac, a favourite spice. In fact, I’ve had it many times in the Middle East with just thyme, sumac and sesame seeds.

Our recipe here has all the components of a delicious and aromatic za’atar. As you make it more and more, feel free to experiment a little with the ingredients; keeping the basic mix of herbs, sumac and sesame seeds, I’ve given a few suggestion in this post to get you started.

How to use Za’atar?

Any which way you like! Za’atar can be used to:

In the Lebanon, one of the most popular ways of using this aromatic blend is to mix it with olive oil and top a type of flatbread called Man’oushe (plural Manakeesh, Manaqish) with it before baking it in an oven or on a saj (a domed oven). Click on the image above for the recipe.

In the video, you’ll see me using pre ground cumin. I toast the cumin, let it cool, grind it in a coffee or spice mill and store in an airtight container until needed. I prefer using ground cumin in my za’atar because it remains in the background and blends beautifully. When it’s pounded from whole, it can stand out a bit more than I like, but it really is a matter of preference.

Click here to read more. Sumac is a deep red coloured Middle Eastern spice from the ground berries of the bush with the same name. In the UK, it’s widely available now in major supermarkets, you should always be able to find it in Middle Eastern shops.

Lemon juice and or lemon

If you can get hold of dried lemon peel, just pound it along when making Za’atar or blitz it in a spice mill first. If using the za’atar in a wet recipe, like the yoghurt, bread topping or marinade, then lemon juice will do perfectly.

Click here to read more. These are limes that have been soaked in brine, then left out to dry in the hot sun, and they come in two shades, as you can see in the images here: brown and black. The black limes are just dried a little longer.

These dried limes are salty, sour, a little musky and with just a hint of bitter.

The sesame seeds are best toasted before being used as this will give you a deeper flavour, with the sesame seeds imparting a nutty flavour and the cumin getting more earthy.

For more spice mixes, head on over to the Ingredients page for mixes from all corners of the world, from the US to Japan, to he Middle East, to Africa. These are just some examples: 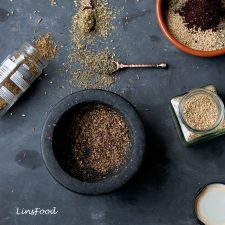 As mentioned, you can also use za’atar to marinate meat and seafood, whether to roast, cook on the stove or on the barbecue. Add some olive oil or yoghurt to turn it into a wet marinade.