This easy Eggless Dorset Apple Cake has all the fruity, tangy and caramel flavours of the traditional apple cake, but perfect for those with an egg allergy.
Jump to Recipe Print Recipe 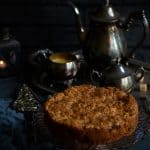 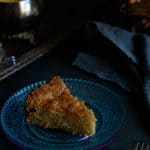 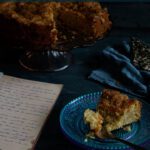 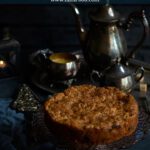 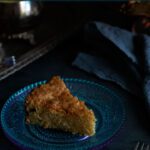 With November fast drawing to a close, and we get ready to say goodbye to fresh, homegrown apples, I thought I’d slip in this delicious, favourite apple cake recipe. Because once December comes around, it’s all about the jingling bells!

Apple cakes are not uncommon, you’ll find variations of it all around the globe; British, American, German and Polish, just to name a few. Essentially, apples are sliced or diced and added to a cake batter and baked.

The British apple cake itself has a few versions, but where I live, on the south coast of England, it is the Dorset Apple Cake that is the most popular. Because we’re in Dorset!

The Dorset apple cake is a fairly rustic affair, and many, many recipes can be found for it. While all the recipes have the same basic ingredients (flour, apples, sugar and fat), they do tend to differ slightly in the makeup.

Then, there is the texture; we’ve got light and spongy, dense and pudding like, and even some that are almost like scones.

The recipe here is loosely based on one I found in my mother-in-law’s old cookbook. Shortly after she got married, she went for cooking classes, as I suppose, is not uncommon in those days. It’s filled with so many old style recipes, both British and European.

I appropriated her cookbook some time ago because she doesn’t actually cook. Hasn’t since I met her over 20 years ago, and according to my late husband, hasn’t cooked “properly” for as long as he can remember.

She told me she stopped cooking around the time they moved south (when my husband was about 8, maybe), because the village didn’t do gas for cookers. She hates electric cookers and so, she stopped cooking! I suppose that’s as good an excuse as any!

Which begs the question: why do they keep buying electric stoves?

I love reading her cookbook, not least because she has beautiful penmanship. But as a fan of culinary history, going back 50-60 years through her written recipes is always a delicious and rewarding adventure.

But let’s take a quick look at our eggless apple cake recipe.

If you’ve been following me a while, you’ll know that my girls have had an egg allergy since they were little. So over the years, rather belatedly, I’ve converted many of our recipes for them. You’ll find more recipes on the Eggless Recipes page.

What Apples to use?

Definitely something tart. My favourite is the big old Bramley, Britain’s most popular cooking apple. It falls apart rather easily when cooked, and so adds a soft, melting texture to the cake.

You could also perhaps go for Braeburn, Golden Delicious or anything you fancy really. It’s all a matter of taste.

Many people love to finish the Dorset Apple Cake batter with a layer of sliced apples. If that’s what you like, use an extra apple, slice thinly, then just top the batter, before baking.

I’ve gone for the crunchy sugar topping because I just love the added sweetness against the sour apples and I’m a huge fan of crunchy toppings! Think brûlée and crumble.

Head on over to the Eggless Recipes page for more recipes with no eggs in them, like the following: 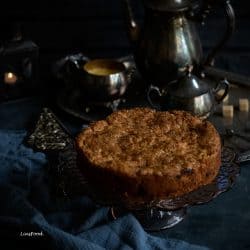