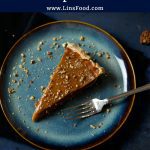 Eggless Pumpkin Pie recipe, for all you folks who have been waiting patiently for this one. A couple since the summer! Deliciously smooth, creamy, with hints of spice and smokiness, this eggless Thanksgiving dessert is going to tick all your boxes!

I made an Eggless Pumpkin Cheesecake some weeks ago that’s perfect for Thanksgiving. It’s been picked up by half a dozen magazines, and to date, has been pinned (on Pinterest) over 100 000 times! So that’s another great eggless Thanksgiving dessert if you can’t eat eggs.

Now I do enjoy a good pumpkin pie when autumn comes around, even if my kids turn their noses up at it. Which explains why I’ve never bothered to make an eggless version for the girls.

However, given the sheer number of requests over the last couple of months, especially after the pumpkin cheesecake, I just had to do it.

But it took me a good few attempts until I was happy with the flavour and texture, which is why this eggless pumpkin pie is being published this late in the season!

It’s a beautiful Eggless Thanksgiving dessert, both in terms of looks – perfectly reflecting the very the colours of autumn – and its creamy, slightly smoky flavour, enhanced by the use of pumpkin spice.

Let’s take a look at some of the technicalities of the recipe, shall we?

The pastry for our eggless pumpkin pie from scratch is a straightforward affair of:

Don’t be scared of making pastry, it’s easier than you think. If you’re making it for yourself the first time, and it falls apart here and there, does it really matter?

TIP: the more water you use, the sturdier your pastry, but it won’t be as flaky. It’s a fine line, and your preference and expertise will only come with experience.

In my recipe proportions below, I am using 3 Tbsp of water, giving me a perfect balance of flaky pastry that doesn’t fall apart as I’m handling it.

If you want to buy your pastry or ready baked pastry case, go right ahead. No one’s going to judge. But try and get one that’s all butter or mostly butter.

Pumpkin Spice is something that’s easily found if you are in the US. In the UK, and many other parts of the world, this is what we call mixed spice, and traditionally used for baking many popular favourites like christmas cakes and hot cross buns.

You can easily make pumpkin spice or mixed spice at home, and make it to suit your tastes, like any spice mix.

It’s eggless pumpkin pie, right? So the only thing that’s of real concern is the swapping out of the eggs for something else while still maintaining the integrity of the filling.

If you have been eggless baking, you’ll know there are so many egg replacements out there: flax seeds, apple sauce, bananas, etc. We favour buttermilk in our cakes, and cornflour for added strength.

But for our eggless pumpkin pie recipe, I went with agar agar first. Growing up in Singapore, agar agar was a way of life, it was used instead of gelatine in just about everything! So I’m pretty familiar with it, and thought it would be a good place to start.

I went with half agar agar, and the other half, cornflour (cornstarch). But after 2 attempts, I decided that I much preferred the texture of the eggless pumpkin pie with just the cornflour. Cuttable, but not firm, just the way I like my pumpkin pie.

Then, to replace the creaminess of the egg yolks:

If you’ve been a long time follower of LinsFood, you know I adore evaporated milk! And it’s delicious in this eggless pumpkin pie!

I hate chopping pumpkin and squash. With a vengeance! So when it comes to baking with the pureéd version, I find it a complete waste of time to use a fresh pumpkin. To me, there is no difference in taste.

However, be sure to get a solid pack can of pumpkin pureé for our eggless pumpkin pie recipe, and indeed any pumpkin desserts that call for the stuff. You don’t want to buy one that says pumpkin pie mix, as you are going to do that yourself.

I have tried both when making regular pumpkin pie. And so, did the same when making this recipe.

Coffee and Bourbon in Pumpkin Pie

I’m a huge fan of both ingredients when making pumpkin desserts. I think they enhance the sweet and smoky flavour of pumpkin. In fact, I think the folks at King Arthur Flour (now King Arthur Baking Company) even suggest a dash of black pepper, if you want to try it!

So in the first 2 attempts, I used both and this eggless Thanksgiving dessert came out delicious. But in my 3rd attempt, I stripped it all down and used the ingredients as you see in the card below.

I found that I much preferred the stripped down eggless pumpkin pie recipe, as I could fully appreciate the creamy, smoky and sweet flavours of the pie. And it was perfectly enhanced by the all-butter pastry. It’s got to be all butter.

If you do fancy adding either, or both, just 1 Tbsp of each will do. But make sure the coffee is strong.

How long will Pumpkin Pie Keep?

It will keep in the fridge, covered, for 3 days. Bring to room temperature before serving.

You could also freeze this egg free pumpkin pie for up to 2 months. Again, defrost thoroughly for 2 hours before serving.

And that about covers all the technicalities. For everyone who’s asked for this eggless pumpkin pie recipe from scratch, you will just love it, I promise!

What was the 4th attempt for, you ask? Well, I had to make the final version a second time, just to make sure it really works! Tried and tested, you know? Now, I’m pumpkin pied out! Rolling out the Pastry