Skip to content
Easy Satay recipe, a favourite street food for so many people! Tiny pieces of marinated meat on skewers are barbecued to perfection before being served with a peanut sauce and slices of cucumber and onions.
Jump to Recipe Print Recipe

Satay is a favourite street food for so many people! Tiny pieces of marinated meat on skewers are barbecued to perfection before being served with a peanut sauce and slices of cucumber and onions.

Where does Satay come from?

Satay is found everywhere in South east Asia. So, where did Satay come from? Would it surprise you if I say that it does in fact owe its origins to the Middle East? Via India, of course.

It’s believed that Satay was introduced to the Indonesians by Indian traders in the form of kebabs, which of course, as we all know is a Persian invention. These kebabs were transformed into the satay or sate as we know it today by street vendors in Java.

Satay in The Netherlands and South Africa

Incidentally, Satay is also very commonplace in the Netherlands and former Dutch colonies, owing to the fact that Indonesia was a Dutch territory. This wonderful invention was one of the things the returning Dutchmen took home with them.

It is also a local food in South Africa, where it’s known as Sosatie, brought over by the Malays, known as Cape Malays. The term “sosatie” is a portmanteau of “sate” and “saus” (sauce).

Singapore used to have an area just off the Singapore Cricket Club that was called Satay Club. All the vendors used to initially sell various forms of satay, which slowly expanded to include the usual local hawker foods like grilled ray, noodles and various forms of rice dishes.

This was a favourite haunt of mine and every Singaporean and expat I know!

The meat is marinated in a paste of spices before being cooked on coals. There is no magic formula for marinating the meat or for making the sauce. It is open to interpretations, according to one’s taste – with or without lemongrass and galangal, more chilli, less sugar, yu get the picture, don’t you?

The taste you are going for with satay is savoury and sweet. The traditional satay is marked by quite a bit of sweetness from the satay itself and hot and sweet from the sauce.

What’s important is, the size and thinness of the meat used. You want to cut your meat thinly for speedy cooking, so that it doesn’t lose too much moisture, yet is brown and crispy.

I frequently use firm tofu cubes, sliced thinly for this. They are fantastic! And these days (2019 – 5 years after I first wrote this post), the variety of meat substitutes is mind bogglingly amazing!

My kids have all recently gone vegetarian because of climate change. And because my girls are allergic to eggs, it’s just easier to look for vegan products.

I’m lucky that the folks I shop with, Ocado, focus on sourcing out small and new producers. Take a look at these chicken tikka skewers. My kids say taste like the real thing.

Satay sauce is made with ground peanuts. Traditionally, a whole lot of oil is used to make satay sauce. I am not a fan of this, and skip the oil altogether by just simmering all the ingredients together and cooking the sauce for about 10 minutes.

A slightly different slant is to add about 50ml (1/4 cup) of coconut milk to the sauce, a very common practice in Thailand.

The sauce can be refrigerated for 3 days and is perfect with so many other things, especially as a salad dressing.

Got a peanut allergy?

I’ve made satay sauce with hazelnuts and it was delicious, for those of you with peanut allergy. Cashew nuts are also good but will produce a much creamier sauce.

Shall we put our aprons on? 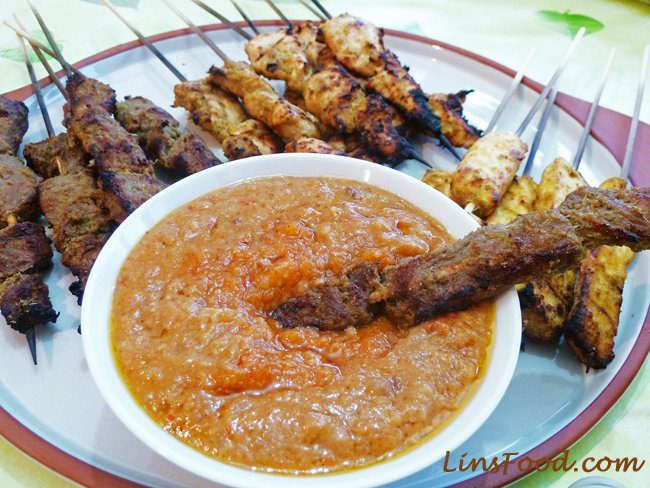 Serve with the sauce, some cucumber wedges and slices of onion. Some traditional rice cakes called ketupat or lontong are usually also served alongside.